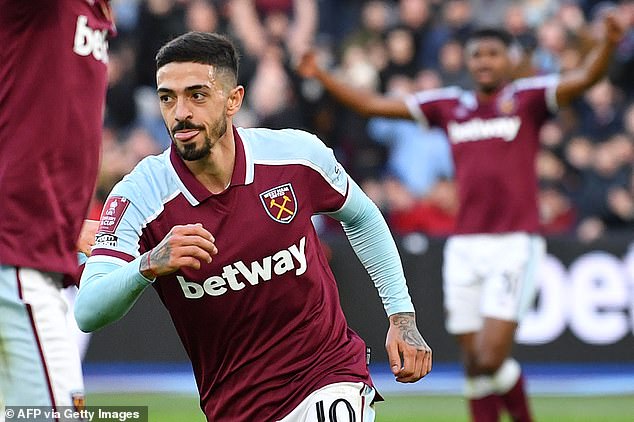 ‘I thought they were going to pull it back… I think they should have done’: Jermaine Beckford and Jermain Defoe agree that VAR should have RULED OUT Manuel Lanzini’s goal for West Ham against Leeds as Jarrod Bowen was offside in the build-up


Jermaine Beckford and Jermain Defoe have agreed that West Ham’s opener against Leeds in the FA Cup should not have stood.

Manuel Lanzini gave the Hammers the lead in the Third Round tie with a scrappy goal following a scramble inside the box.

There was a lengthy VAR check though for Jarrod Bowen’s involvement in the goal before Lanzini struck the ball into the net.

The point of contention was whether a block on a Nikola Vlasic shot ricocheted back off the Croatian into the path of Bowen who went for the ball from an offside position.

VAR eventually decided that the goal should stand but ITV pundits Beckford and Defoe were surprised at the decision.

Former Leeds striker Beckford said: ‘I actually thought it was offside. When we originally see it in real time I thought great movement, great positioning etc.

‘But you see here just as the connection is made to have a shot which obviously is blocked, I feel Jarrod Bowen is in an offside position.

‘He starts in an offside position and goes for it, Meslier gets a touch on it and the ball falls to Lanzini. Lovely finish but you know when it back to VAR I actually thought they were going to pull it back and in my opinion I think they should have done.’

Defoe who played for the Hammers towards the start of his career, agreed with Beckford.

He said: ‘When you slow it down and you can see he was in an offside position and he was on the move and went for the rebound so that’s why when we watched it back we thought it definitely was going to be given offside.

‘Lanzini follows in and it’s a lovely finish. Just that fortune they needed at that stage of the game as there was not much in it before that.’