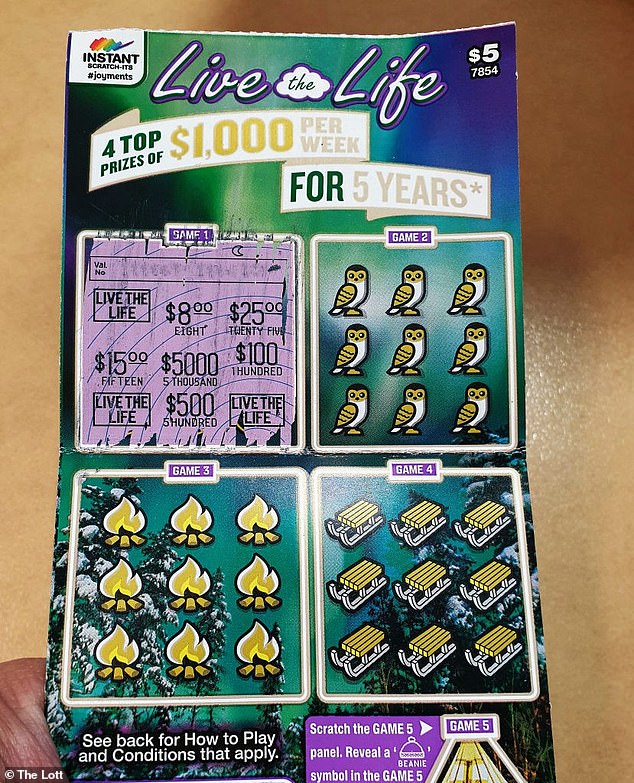 Man who bought a scratchie as a Christmas gift for his cousin that won  $70,000 is stuck between a rock and a hard place when his wife demands the ticket back


A man who bought his cousin a scratchie that won $70,000 has been forced into a dilemma after his wife demanded the Christmas present back.

The American explained in a Reddit post that he and his wife went to a ‘belated Christmas gathering’ with their extended family last week.

As is their tradition, the family bought each other ‘stocking stuffers’ limited to $10 and the man and his wife typically buy $5 scratch lottery tickets.

The man explained the tickets were mostly a fun gimmick for the family but they occasionally had a few minor wins.

‘One year my uncle’s ticket hit for $50 and everyone went crazy. It’s always a good time.’

However this year had a ‘jackpot’ win of $70,000 from the ticket gifted to the man’s cousin.

He said he was elated for his cousin and believed it was well deserved.

‘He was screaming and his mom was actually in tears and whole room was excited. It was literally one of the top ten experiences of my life,’ the man wrote.

‘My cousin just graduated from college. His mum is single and was one of those fiercely independent women who refused charity.

‘She took on extra jobs to help him pay for school. He worked at least two jobs himself while going to school full time and still managed dean’s list.

‘He’s also saving for an engagement ring for his sweet girlfriend of three years.

‘This money would literally change this kid’s life and frankly I think it couldn’t have gone to a better member of my family.’

But the man’s excitement was quickly dulled when he received a text message from his wife to meet him outside.

His wife told him to go inside and take back the winning lottery ticket believing the family shouldn’t be expected to ‘give him’ $70,000.

The man said he refused to take back the ticket on the basis they are financially comfortable. He and his wife have hardly spoken since.

The post was made under Reddit’s popular ‘Am I the A**hole’ thread, many users agreed the man was not

Commenters on the thread were quick to defend the husband’s actions and called the wife ‘selfish’ and ‘greedy.’

‘Your wife wouldn’t want the ticket if it were worth $0 or even the $50 your uncle won would she?’ one person pointed out.

‘She wouldn’t demand you’d go back in there and do some taksie-backsies for zero dollars.’

‘The wife is a greedy and uncharitable piece of work,’ another commented.