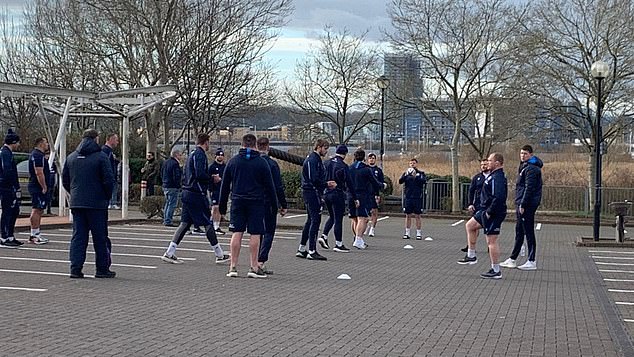 By Alex Bywater For Mailonline


Scotland warmed up for their crunch Six Nations clash against Wales with some last-minute drills in a Cardiff Bay car park on Saturday morning.

Gregor Townsend’s side are looking to back-up their Calcutta Cup victory over England in round one with victory at Principality Stadium – a venue where they have not won since 2002.

Ahead of the match, captain Stuart Hogg and playmaker Finn Russell led the team through a series of exercises near their St David’s Hotel base in the Welsh capital.

Bemused onlookers watched as Scotland’s players went through their line-out manoeuvres and other training sequences on the eve of kick-off.

Hogg led his team to famous away wins over England and France in last year’s Championship, but those games were played in empty stadiums due to the pandemic.

A 74,000-strong Principality Stadium crowd will try and help Wales return to winning ways after their 29-7 humbling by Ireland in round one.

The Scotland squad have been staying at the St. David’s Hotel in the Welsh capital

‘I’ve told the boys if they’ve not been fortunate enough to play there yet then they’re going to get their eyes opened,’ Hogg said of playing in Cardiff.

‘We went to Twickenham and Stade de France last season where there was nobody watching.

‘It’s completely different now we are going to be playing in one of the most hostile venues in world rugby. It’s one hell of an atmosphere.

‘It’s a completely different challenge for us, but one we are very much looking forward to. As a squad, we’ve gained a huge amount of valuable experience.

‘We have been to places where we have been challenged and been on the wrong end of the score, but moving forward that’s probably a good thing to have happened to us.’

Hogg will lead Scotland against Wales 10 years to the day since he made his debut in Cardiff.

‘There have been some highs and lows, but I’ve enjoyed it all. Since Gregor came in, we seem to have been making good progress,’ Hogg said.

‘This Scotland squad is the best I’ve been involved in, both on and off the field, and hopefully we can continue to rise as a team.’