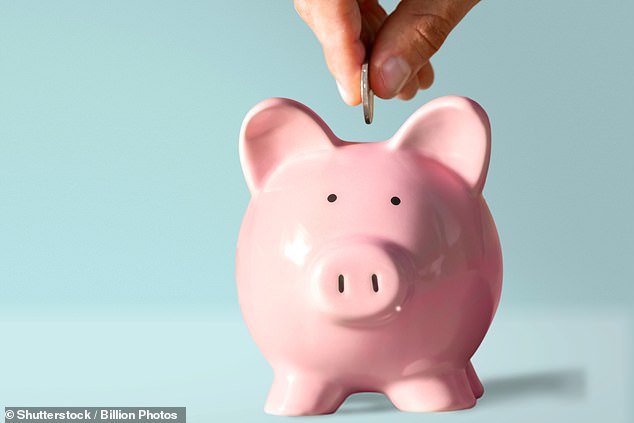 Savers have finally been offered a glimmer of hope after NS&I hiked interest rates on a raft of accounts.

The Treasury-backed bank revealed yesterday it has doubled the return on its three-year Green Savings Bond from 0.65 pc to 1.3 per cent.

It follows two rate rises on popular easy-access accounts last week, which will boost returns for savers by £75 million a year.

Creeping up: NS&I has doubled the return on its three-year Green Savings Bond from 0.65% to 1.3%

Around 650,000 savers hold its Income Bonds and Direct Saver, which now pay 0.5 per cent. Experts hope the move will force other banks to follow suit.

But even then, with inflation expected to hit more than 7 per cent this year, it is unlikely that rates will improve enough to help savers protect their cash from soaring prices.

National Savings & Investments (NS&I) was forced to raise its rates to attract more money in order to meet its targets.

The bank aims to bring in around £6 billion in the 12 months to March 31 this year. But its low rates have failed to entice savers and, at the end of December, it had raised only £2.1 billion.

Chief executive Ian Ackerley says: ‘The new rates will ensure our products are priced in line with the broader savings sector. The increase will also help us to meet our annual target.’

The money raised by its green bonds does not count towards its target. It is instead used to finance green projects and tackle climate change.

Savers who signed up for these bonds when they were launched in October last year won’t benefit from yesterday’s rate rise. They will be stuck earning 0.65 per cent for the three-year term.

You can cancel within 30 days of signing up, but if you miss this window you are lumbered with the bond for another two years and 11 months.

The 1.3 per cent rate is also still way below the best three-year deals available. Tandem Bank and Secure Trust both pay 1.85 per cent.

Experts also question whether now is the right time to lock away your money when interest rates are expected to rise again this year.

Laura Suter, head of personal finance at AJ Bell, says: ‘The Bank of England expects the base rate to hit 1.25 per cent, up from the current 0.5 per cent, before the end of the year — although this is by no means certain.

‘But this could mean an uptick in savings rates. If you lock your money away, you will miss out on those potential increases.’

Up until November, NS&I paid a miserly 0.01 per cent on Income Bonds and 0.15 per cent on its Direct Saver. These are its two most popular accounts after Premium Bonds.

At the end of December, NS&I boosted the rates on both accounts to 0.35 per cent, before upping them again to 0.5 per cent last week.

The latest rise will earn its 650,000 savers an extra £75 million interest a year. Both accounts give you easy access to your money.

The Income Bonds are particularly popular with pensioners because they pay interest every month, rather than just once a year.

Helen Morrissey, analyst at Hargreaves Lansdown, says: ‘Whether the boost is enough to tempt savers back remains to be seen.’

Myron Jobson, at Interactive Investor, adds: ‘It’s good news that the Treasury-backed bank has raised rates. Many banks may now feel pressured into raising theirs from ultra-low levels.’

On the High Street, big names including Barclays, Halifax, Lloyds, HSBC, NatWest and Santander still pay just 0.01 per cent on easy-access accounts — even though the Bank of England base rate has risen from 0.1 per cent to 0.5 per cent since December.

Savers have around £650 billion sitting in these accounts, and another £259 billion in current accounts earning no interest at all.

By switching to NS&I you could earn up to £50 a year more interest on each £10,000, and all your money is backed by the Treasury.

You can open and run a Direct Saver account online or by phone. Investec’s Online Flexi Saver pays a better 0.71 per  cent.

But if you want a telephone-based account, NS&I’s Direct Saver is top. Coventry BS and Leeds BS match the rate, but restrict the number of times you can take money out of your account. There are no such restrictions on either NS&I accounts.

The Income Bonds at 0.5 per cent can be run online, by phone or through the post. The top online monthly income rate on easy-access accounts is 0.67 per cent from Shawbrook. But NS&I’s Income Bonds are top if you want to run your account by phone or post.

These are the best three year fixed rates savings accounts featured in This is Money’s independent savings tables.