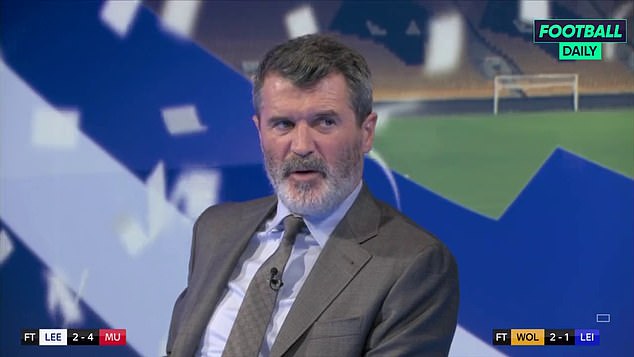 
Roy Keane has backed Manchester United to secure a top four finish following their 4-2 victory against Leeds at Elland Road on Sunday.

Ralf Rangnick’s side held off a spirited fightback from Leeds to move further clear of their rivals for the final Champions League spot.

Despite Arsenal, Wolves and Tottenham all having games in hand on United, Keane believes his former club will get into Europe’s elite club competition if they can put any off-field issues to the side for the final few months of the campaign.

‘I think United will be fine for fourth, I really do. There’s been lots of noises about players wanting to leave, contract situations with Pogba and Jesse Lingard, and people like that. Focus on the next few months, big few months for Man United, try and get fourth,’ he told Sky Sports.

‘They’ve a big European game coming up, focus on that, and then regroup again in the summer regarding obviously a manager, they’ll be looking at recruitment, but keep their heads and keep focused and they should be OK.’

Reflecting on Sunday’s match, Keane singled out Jadon Sancho for praise. The winger provided assists for Bruno Fernandes and Fred either side of half time, and Keane admitted he was pleased to see him hitting his stride after a difficult start to life at Old Trafford.

‘He’s getting a bit of swagger back, and it’s nice to see because he was getting heavily criticised,’ he added.

Robbie Keane was also in the Sky Sports studio, and he hailed Sancho’s improvement in recent weeks, claiming that the youngster is beginning to replicate the form that he showed at Borussia Dortmund.

‘He was brilliant today, Sancho. The last few weeks he’s been fantastic. When he first came, every time he got the ball he was going backwards and playing simple passes.

‘Now in the last four weeks I’ve seen him, when he gets it in 1 v 1 situations, he’s running at people, he’s nutmegging people.

‘His numbers at Borussia Dortmund were incredible, he needs to do it now. He seems to be starting to deliver now with goals and assists,’ he said.

Interim boss Ralf Rangnick praised the way his team fought through adversity, before admitting that he is unsure whether their response would have been as emphatic at the start of his tenure in November.

‘The five minutes after (Leeds’ equaliser) was really intense, very difficult for us and I think the team showed maturity, we’ve grown together as a team,’ he said on Sky Sports.

‘I’m not sure this would have happened two or three months ago but it happened today and it was important. We showed a reaction in the last 20 minutes and in the end we deserved to win.

‘It was a fantastic game to watch if you were not responsible as a manager for either of the two teams.

‘If we want to finish fourth in the league, we cannot afford to lose and drop any more points, even more when you’re 2-0 up and that’s why this was a massive win,’ he said.