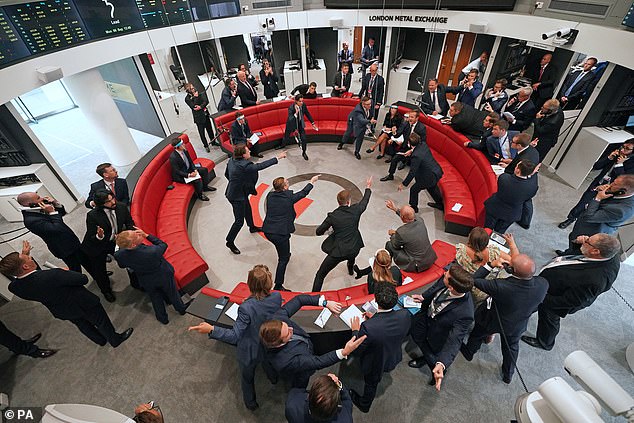 The London Metal Exchange (LME) halted the trading of nickel after prices more than doubled in just a few hours to over $100,000 a tonne for the first time amid panic buying.

The increase, the biggest recorded in the exchange’s 145-year history, sent shockwaves through global markets.

‘Unprecedented’: The London Metal Exchange trading ring had to halt the trading of nickel after prices more than doubled in just a few hours

Other commodities – from palladium and platinum to wheat, oil and gas – have also soared as the war in Ukraine threatens the supply of raw materials.

Susannah Streeter, senior investment and markets analyst at Hargreaves Lansdown, said: ‘The breath-taking rise of commodities is causing a whirlwind of anxiety on financial markets and exchanges, as traders speculate about the knock on effects of the conflict.’

Nickel is a key material used to make stainless steel and electric car batteries and the surge in prices is likely to make such vehicles more expensive.

It is also a major Russian export, with the country accounting for around 10 per cent of global supply.

The LME said the ‘unprecedented’ price spike forced it to suspend trading. The exchange planned to resume trading ‘as soon as possible’.

However, due to ‘continued uncertainties’ it did not expect the nickel market to reopen before Friday.

Nickel’s meteoric rise came as metal buyers tried to lock in supplies amid worries that Russia’s invasion of Ukraine will disrupt the flow of raw materials from the region.

Nickel was also pushed higher by a so-called ‘short squeeze’ as investors betting on a fall in the nickel price were forced to unwind their positions.

Prices of palladium, a precious metal used in catalytic converters for cars, also climbed to record highs of over $3,000 an ounce as investors fretted sanctions could cut off access.

Russia is one of the world’s largest producers of palladium.

Platinum, meanwhile, which is used to improve the efficiency of fuel cells and to make computer hard drives, climbed to over $1,160 an ounce for the first time in nine months.

Gold, a traditional haven during market volatility, has also surged amid the panic to more than $2,000 an ounce for the first time in 19 months.

Things were similarly frantic outside the metals markets, with oil and gas prices having soared as Western countries discuss ways to reduce their reliance on Russian energy.

Prices of Brent crude have risen by more than 60 per cent so far this year, hitting a 14-year high of $139 a barrel on Monday before easing back.

Oil rose again yesterday, to almost $132 a barrel. Natural gas has ballooned. The surge in energy prices has pushed up fuel prices at the pumps as well as household gas and electricity bills.

Both the UK and the US yesterday announced plans to ban imports of Russian oil in a bid to ratchet up economic pressure on Moscow. The Kremlin, meanwhile, threatened to cut Europe off from its gas supplies if a ban on oil imports is introduced.

The shadow of war has spread to international food markets with prices of wheat soaring to record highs.

The surge in prices will also have knock-on effects for the price of staples such as bread, pasta, biscuits and beer, pushing up costs for consumers across the world.

The mania in commodities stood in stark contrast to global stock markets, which have tumbled in value this year, with the FTSE 100 down around 7.2 per cent since the beginning of January.