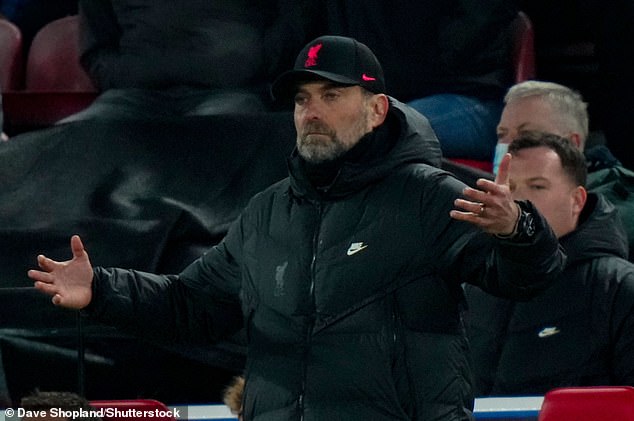 DOMINIC KING: For once, Anfield couldn’t summon fire and fury – with an unrelenting run-in, Jurgen Klopp knows they will have to quarry new levels of mental resilience to cope with the pressure of having to win, win, win

They tried to make it an occasion that befitted the reputations of the teams but, for once, Anfield on a European night did not resemble a furnace.

The fire and fury that was missing for large chunks of a tense night were also absent from Liverpool’s play.

Jurgen Klopp had warned that a two-goal advantage was problematic and you could see why. Liverpool didn’t know whether to stick or twist and neither did the fans.

There were reasons. Liverpool’s ruthlessness in Italy three weeks earlier had put the quarter-finals in sight and they seemed intent on protecting the advantage they held over Inter rather than trying to nullify them with one of those early blitzkriegs.

When a team hits the kind of form Liverpool are in, a sense of jeopardy is gone and until Lautaro Martinez swept a superb strike past Alisson Becker, many inside Anfield would not have had a moment’s anxiety that the quest to make history would come to an abrupt end here.

Klopp’s side played preservation football, diligently holding Inter at arms’ length. There was a reason, perhaps, for taking their foot off the throttle as the pace of the run-in will be unrelenting. It will ask questions of this squad like never before.

Mention the possibility of doing a clean sweep to Klopp and he will get exasperated, pointing to the fact that the record books will tell you it is impossible. It has not been done before and when you consider what lies in front of them, you understand why.

If they are going to play every possible game from now until the Champions League final on May 28, Liverpool’s schedule will be 19 fixtures – starting on Saturday at Brighton – in 65 days, excluding the international break.

Liverpool have been on an incredible run of form, one that has enabled them to reignite the Premier League title race, but they are going to have to quarry new levels of mental resilience to cope with the intensity and pressure of having to win, win, win.

It was something Klopp recognised before kick-off when he said: ‘Confidence is like a little flower. Someone can stamp on it and ruin it in a second, and it can take a long time to get it back. The boys know they are good, but the opponent is confident, too.’

And Inter were confident. They defended the spaces, pushing Liverpool back when the chances allowed and what they might have achieved had Alexis Sanchez not got himself sent off is open to debate.

Liverpool will surely play better in the coming weeks but there will also be recognition that there is no other option now – as the campaign gets to the stage when every second counts – other than put their foot to the floor.

If this was the break between acts, Klopp can regather his group and get them rolling again at Brighton on Saturday. To go the distance, to do what has never been done, every player needs to be ready to make a contribution.