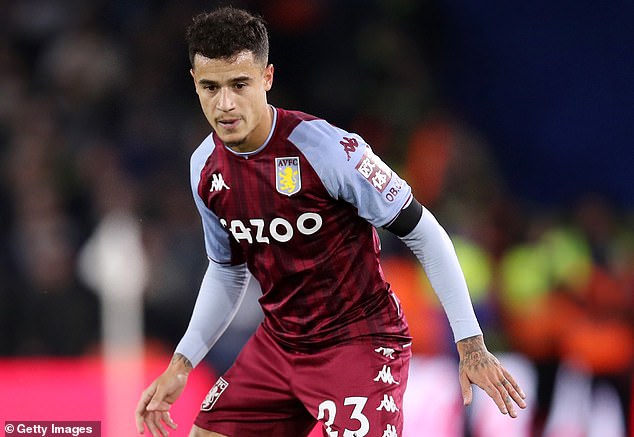 Arsenal ‘look to hijack Aston Villa’s £33m summer move for Philippe Coutinho’, with hopes resting on whether rivals can afford his full salary and fee after the end of his impressive loan spell from Barcelona

Aston Villa might have the option to sign Phillipe Coutinho, but they could face competition from another Premier League side.

The Brazilian has been in fine form since joining Steven Gerrard’s side on loan from Barcelona in January, scoring four goals and registering three assists.

Villa are understood to have a €40m (£33million) option to sign the 29-year-old on a permanent transfer come the end of the season.

Spanish publication Sport have reported that Arsenal have ‘expressed an interest’ in buying Coutinho during the summer transfer window.

Gerrard has made no secret of the fact he would like the club to sign his former Liverpool team-mate come the end of the season.

Arsenal’s hopes of hijacking the deal will depend on whether Villa can afford his full salary and fee at the end of his loan deal.

The Spanish giants, who signed Coutinho for a club record £142m from Liverpool in 2018, won’t go any lower than the option price they set Villa to sign him.

Though Gerrard would love to sign Coutinho, he admitted the final decision will come down to the club’s owners.

He said: ‘Phil was successful at Barcelona but he had difficult periods as well. He got to the stage where he needed a change of scenery and a different movie.

‘We want to be that movie for him because if we want to get to where we want to be, we need to build it around talents like Phil, because at his best he is a high-level player.

‘All good teams have game-changers who the opposition are really concerned about before a ball is kicked. Phil has that status and he is giving belief to his team-mates.

‘Our strikers Ollie Watkins and Danny Ings want him alongside them because he delivers on the big stage. I don’t control transfer fees or wages.

‘All I can do is give my opinion to (sporting director) Johan Lange, (chief executive) Christian Purslow and the owners. They are watching the games and they will make the final decision. Phil has shown what he is capable of so far.’