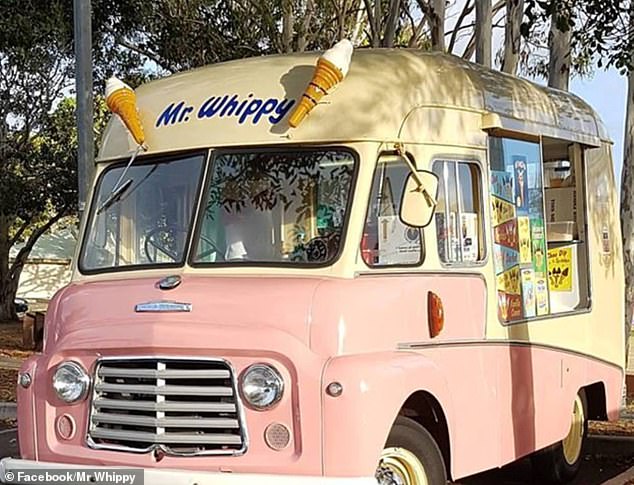 Nostalgic Australians have been transported back in time after pictures of one of the country’s original Mr Whippy vans took the internet by storm.

Ten of the vans were sent from the UK in 1962 when the popular franchise was started in Sydney, and at least one of them is still operating in Queensland’s Hervey Bay, a popular ‘retirement town’.

Since the 1960s vans carrying sweet treats and blasting cute tunes have become a staple of suburbia and the subject of core childhood memories.

The photograph, which shows the pink and yellow Commer Carrier with lit-up ice cream-cone shaped lights, was an instant hit with people of all ages.

One elderly woman said the picture reminded her of the first time she heard the iconic Greensleeves tune tinkling up her street.

‘I’ve booked a van to come to my aged care facility, can’t wait for them to hear the music playing as he drives into our car park,’ she said with delight.

One man said as a boy he would chase the ice cream van through the streets on his bicycle, hoping to find it in time for a soft serve.

‘When he stopped the music would stop and I would have to wait until he got moving to start my search again,’ he said.

Did you ever get Mr Whippy as a child?

He wasn’t the only one who struggled to secure a soft serve or would have to work hard for it.

‘By the time we rushed inside to mum to get money, he was way up the street so it was a race between us to get to him first,’ one woman said.

‘We used to hear the van a mile off and run to my aunts. We would have an ice cream then both run back to my house. By the time the van got there it was time for another ice cream,’ said another woman.

But not all of the memories were quite as sweet, with one woman revealing she was run over shortly after getting a thick shake from one of the vans as a child.

‘The Mr whippy truck did not pull into the curb when I was younger, he parked about 1.5metres out,’ she explained.

‘As I crossed in front of the truck I couldn’t see the car coming up behind and he didn’t see me and we met in the middle of the road.

‘I was very lucky to just be badly bruised and received several free thick shakes from Mr Whippy after that,’ she said.

A Mr Whippy franchise in Queensland proudly boasts one of the original vans in their fleet, left, as well as other ‘older’ modern vehicles, right

Others said Mr Whippy would find them every week, so they didn’t have to search the streets for the fun-filled van.

‘There used to be one that would come to our primary school every Friday. Which put a bit of pressure on the parents who came to pick up their children. Looking back it was pretty cheeky of Mr Whippy,’ one woman laughed.

Robby Staff has one of the original vans in his collection and is proud to note it still operates today.

This picture shows two of the original 1962 vans parked up in Maryborough, Queensland as well as some of the operators

‘We regularly visit aged care facilities with our ice cream vans. The van featured in this post is one of my vintage vans still operating on the Fraser Coast, Queensland,’ he wrote on the post.

He said there are just a handful of the original vans around – noting most ice cream trucks attempt to imitate the style.