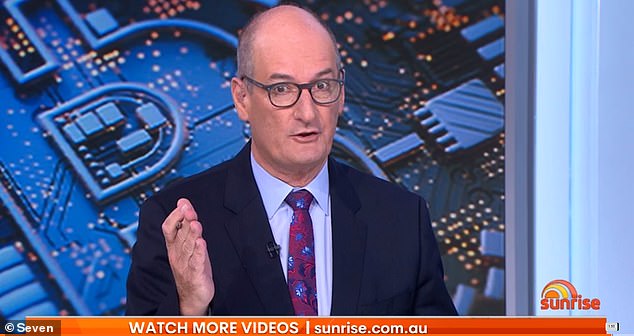 In a statement, the ACCC said scam ads on the platform featuring the likenesses of businessman Dick Smith, Sunrise presenter David Koch and former NSW Premier Mike Baird were being used to promote crypto and money-making schemes.

‘The schemes were in fact scams, and the people featured in the ads had never approved or endorsed them,’ ACCC chairman Rod Sims said in a statement.

In an action launched in the Federal Court on Friday, the ACCC alleged the ads – common to the platform – featured fake news articles where the celebrities appeared to endorse the scam products, when they had not.

Users were then invited to sign up and were contacted by scammers who would repeatedly call them and convince users to deposit funds into the fake schemes.

‘Meta should have been doing more to detect and then remove false or misleading ads on Facebook, to prevent consumers from falling victim to ruthless scammers,’ Mr Sims said.

Mr Sims said Meta is responsible for the ads it publishes on its platforms.

The ACCC alleged Meta knew about the ads on Facebook and didn’t take the sufficient steps to remove them.

‘Meta failed to take sufficient steps to stop fake ads featuring public figures, even after those public figures reported to Meta that their name and image were being featured in celebrity endorsement cryptocurrency scam ads,’ Mr Sims said.

‘In one shocking instance, we are aware of a consumer who lost more than $650,000 due to one of these scams being falsely advertised as an investment opportunity on Facebook. This is disgraceful.’

A Meta spokesperson said they did not want to see ads scamming or misleading people on Facebook.

‘We use technology to detect and block scam ads and work to get ahead of scammers’ attempts to evade our detection systems,’ the spokesperson said.

‘We’ve cooperated with the ACCC’s investigation into this matter to date. We will review the recent filing by the ACCC and intend to defend the proceedings.’

Koch in 2019 urged his followers not to fall victim to the scams.

‘It is driving us crazy the con artists using (wife) Libby and I as bait to lure people into investing in Bitcoin,’ he said.

‘Facebook are doing their best to take them down but then they pop back up using different offshore servers.’

Karl Stefanovic and Waleed Aly have also been used to promote the schemes.