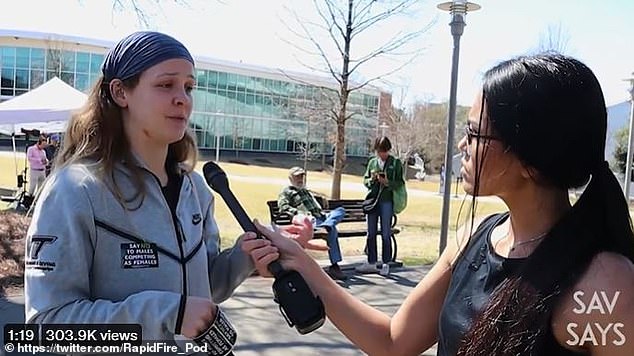 Transgender swimmer Lia Thomas has been condemned for the first time on camera by a fellow college athlete, who said many others were ‘disappointed and frustrated’ by her competing in women’s races – but were afraid to speak out.

While several women have spoken anonymously about their concerns, a Virginia Tech student on Thursday said she was compelled to speak out on seeing how devastated her teammate was.

The unnamed student, who is also swimming at the NCAA championships in Atlanta this week, said her teammate came 17th in the heat, and only the top 16 qualified for Thursday’s final.

She told the Rapid Fire Podcast: ‘I have a teammate who did not make finals today because she was just bumped out of finals – and it’s heartbreaking to see someone who went through puberty as a male and has the body of a male be able to absolutely blow away the competition.

‘She was very emotional and it’s hard to see since it’s her last NCAAs and she really loves that race.

‘And it was just heartbreaking to see that she put all their effort into it today, and with the best time that she’s went in the morning session before, and still not make it back.

Virginia Tech swimmer competing in this year’s NCAA championship details how her teammate was brought to tears after her place in the finals was taken by Lia Thomas: pic.twitter.com/mow56mVp1W

‘It’s hard to see someone who works every day, every night, still not be able to compete against someone like that.’

Thomas, 22, has been easily defeating her opponents throughout the season, breaking records and making her the hot favorite to win Thursday’s race.

The Virginia Tech student said that it was demoralizing to compete against her.

‘Then you go into it with a mindset that you are you don’t have a chance, if that makes sense,’ she said.

‘Like, it’s hard to compete against someone with the aerobic capacity, the muscle development, the body of a man – it’s hard.

‘It’s hard to think about it like that – and staying positive, I bet, for other swimmers in that heat is overwhelming. Although I can’t speak for them.’

Yet her participation in the event – until 2019 she competed in men’s events – pushed out another athlete who dreamed of making the final.

Lia Thomas is seen on Thursday evening with her NCAA trophy. She is the first transgender athlete to win a NCAA title

Lia Thomas is seen swimming for the University of Pennsylvania on Thursday, at the NCAA championships in Atlanta, Georgia. She has become the first transgender athlete to win a NCAA final

Thomas, 22, is seen ahead of her heat on Thursday, which she also won – making her top seed for the final

The student added that her feelings were widely shared.

‘It’s a common conception that we are all very disappointed and frustrated with someone who is — has capabilities more than us women have to be able to compete at this level, and take opportunities away from other women.’

Meanwhile, an Olympic swimmer whose daughter will race Thomas at the weekend insisted that the controversy surrounding the transgender swimmer’s history-making victory is not her fault, but is instead the problem of the sport’s organizers.

Felipe Delgado, who competed for Ecuador in the Atlanta and Sydney Olympics, said that he felt Thomas was being betrayed by the sport’s leadership.

‘We need to understand that this is NOT Lia’s fault,’ Delgado tweeted.

‘She is playing within the rules that have been set. If anything, this is the fault of those who failed to act when given the opportunity.’

Thomas, 22, is seen immediately after her historic victory – which was greeted with a muted response by the crowd

Felipe Delgado, who competed in the Atlanta and Sydney Olympics for Ecuador, on Thursday condemned Thomas’s participation in women’s events. His daughter Anicka (pictured) will race Thomas at the weekend

In February USA Swimming ruled that transgender athletes could only compete in women’s events if they had completed 36 consecutive months of testosterone-reduction treatment. The rule would have meant that Thomas could not compete, but the NCAA decided 10 days later that they would only require one year of therapy, arguing that it was unfair to change their rules mid-season.

Delgado, who lives in Mission Vieja, California, and runs the Evolution Swim Academy, said they had missed their chance to avoid the controversy – which has overshadowed the season.

‘Fault those that out of fear of being cancelled or labeled transphobic, we’re not willing to do the right thing and admit that they were wrong & that much more has to go into this before people like Lia can complete fairly.

‘This will be more hurtful when they go back and have to erase Lia’s accomplishments because of public outcry, loss of revenue, loss of sponsors, and potentially, the loss of women’s sports.

‘What happens when this reaches the international scene & sporting events like the Olympic Games come into play? Then what?’

Anicka Delgado, 19, is seen in action at the Tokyo Olympics. She will race Thomas at the weekend

Delgado is following in the footsteps of her father Felipe, who competed in two Olympics

Delgado pointed the finger of blame at the NCAA leadership, accusing them of cowing from a difficult decision.

‘This is NOT Lia’s fault & standing up for the integrity of women’s sports does not make one transphobic,’ he said.

‘I just wish those that have power know that.’

Delgado’s daughter Anicka, 19, represented Ecuador in the 2020 Tokyo Olympics, and currently competes for the University of Southern California.

At the weekend she will race Thomas in the 100 yard freestyle.

‘My daughter will be racing Lia Thomas this weekend in the 100 free at women’s @NCAA,’ Delgado tweeted.

‘I’ll be rooting for my daughter. #fighton.’