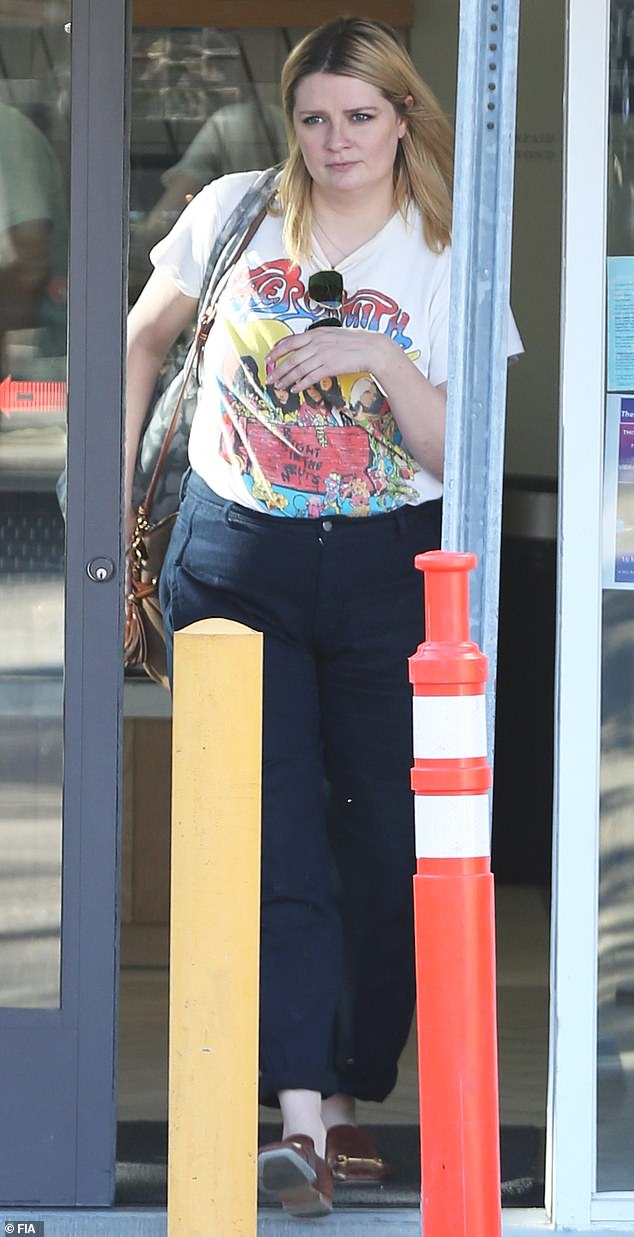 By Bethan Edwards For Mailonline

Mischa Barton kept a low profile while out and about grocery shopping in Beverly Hills on Wednesday.

The actress cut a casual look in a white Aerosmith T-shirt which she styled tucked into a pair of rolled up navy trousers.

The 36-year-old accessorised her relaxed look with a pair of sunglasses and flat tan loafers which featured gold buckles.

Keeping it casual: Mischa Barton kept a low profile while out and about shopping in Beverly Hills on Wednesday as she tucked a white T-shirt into a pair of rolled up navy trousers

Mischa swept her dirty blonde tresses behind her ears which fell just below her shoulders as she exited a supermarket.

She showed off her natural beauty wearing minimal make-up and simply added a gold necklace to the look.

Mischa first appeared in blockbuster films The Sixth Sense and Notting Hill in 1999.

But she found overnight superstardom as Marissa Cooper on the mid-aughts series The OC.

Natural beauty: The OC icon showcased her natural beauty as she went bare-faced while running errands

The reality show serves as a sequel to the original Hills, which ran on MTV from 2006 until its cancellation in 2010.

Many of the other original cast members returned to the new version of the teen drama including Heidi Montag and her husband Spencer Pratt, Whitney Port and Brody Jenner.

Mischa explained before the first season premiered how she had rejoined the show in a hope to control her own narrative.

‘I think there has always been a lot of mystery around me. It’s fun to allow people to actually see me!,’ she told Glamour.

‘There really was a time when I couldn’t do anything or get away with anything or even leave the house without having to really think it through,’ she added.

Last year, the Teen Choice Award winner opened up to E! News with never before heard details about her departure from The OC back in 2007.

She reflected on how ‘general bullying from some of the men on set’ in part led to her exit from the show.

‘I’ve always felt ashamed in a way to really talk about what went on behind the scenes because I’ve always been a very private person and very aware of people’s feelings,’ Mischa revealed to the outlet.

‘Now that we’re living in this era where we do speak out about our experiences and women do come clean about what was really going on behind the scenes and how they were treated, it’s a slightly different thing.’

She explained how ‘it’s a bit complicated,’ and due to ‘evening out everybody’s pay—and sort of general bullying from some of the men on set that kind of felt really s***ty’.

Watch the Iconic Series, The O.C. only on Stan in Australia.

Major throwback! Mischa pictured back in March 2009 after leaving The OC