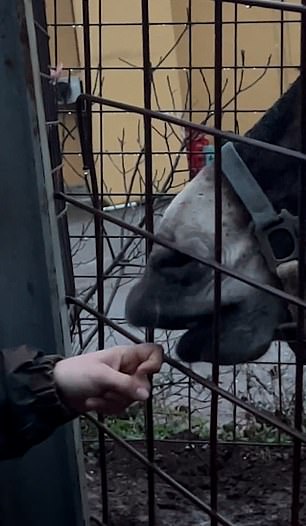 By Isabella Nikolic For Mailonline

This is the adorable moment a protective dog knocks its owner’s hand out of a hungry donkey’s reach.

Cristina Castillo Alonso, from Barcelona, posted the heartwarming scene to TikTok on Monday.

Footage shows her boyfriend Álvaro González Iglesias putting his hand towards a donkey’s mouth as it starts gently nibbling at it.

Cristina Castillo Alonso, from Barcelona, filmed the heartwarming scene which shows her boyfriend putting his hand towards a donkey’s mouth

And the couple’s large white fluffy dog Coco then decides that some harm may come to its owner.

Coco reaches one of its paws up to Mr Iglesias and pushes it out of the donkey’s reach.

Mr Iglesias then starts laughing as he looks towards the camera.

Psychologist Ms Alonso posted the adorable clip to TikTok with the caption: ‘I was very surprised by his reaction.’

And she put text over the video which reads: ‘My dog ​​saves my boyfriend from being eaten by a donkey.’

The enchanting video has been watched 45,000 times in just three days and has received 5,629 likes.