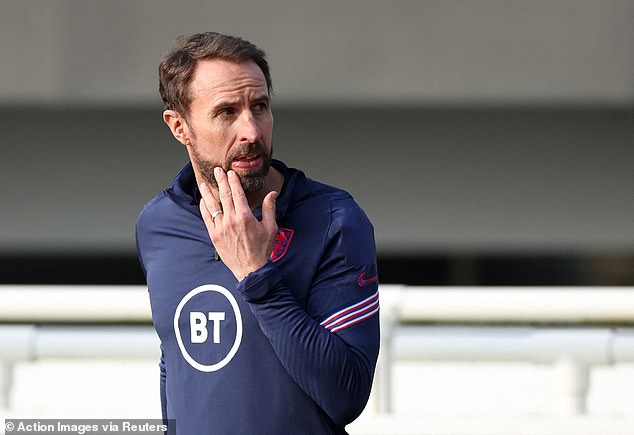 While England’s friendlies against Switzerland and the Ivory Coast may not be the biggest test of the year, they could be opportune for Gareth Southgate ahead of this year’s World Cup.

With Qatar on the horizon – and England one of the favourites – this international break could play a key role in the Three Lions’ boss’s selections for the World Cup.

Meanwhile a flurry of injuries took Trent Alexander-Arnold, Reece James, Tammy Abraham and Aaron Ramsdale out of the running and opened the door up to a trio of new call-ups.

The England boss will be monitoring if the fresh blood can stake their claim and if the old guard can prove their still worthy as he looks towards a crunch decision in November.

Here, Sportsmail takes a look at the key points Southgate will be looking for from England’s international break…

How will new players fare?

Gareth Southgate has called up Kyle Walker-Peters, Marc Guehi and Tyrick Mitchell for the first time for England’s friendlies.

Guehi was named England U21 captain in September and boss Lee Carsley praised the 21-year-old’s maturity and ability. After starting all but one of Crystal Palace’s 29 Premier League games this term, he has now caught Southgate’s eye.

Mitchell was not called up for England at any age but after cementing a starting spot in Patrick Vieira’s side he has finally seized the opportunity to represent his country.

Kyle Walker-Peters, Marc Guehi and Tyrick Mitchell (L-R) have been called up for the first time

England have an established defensive old guard of Harry Maguire and John Stones, with Conor Coady and Tyrone Mings deputising well. But this is a clear chance for Guehi and Mitchell to stake their claim.

Meanwhile, a string of injuries has left Southgate sorely lacking in terms of full backs. Liverpool’s Alexander-Arnold and Chelsea’s James withdrew from the squad through injury which has opened the door to Southampton right back Walker-Peters.

All three will be looking to impress, while Southgate will be monitoring them closely as he begins to shape his squad.

Can Harry Maguire put his Man United woes behind him?

It’s been a turbulent season for Harry Maguire at Old Trafford and he has faced an onslaught of criticism for his performances.

But, while team-mate Marcus Rashford failed to make the cut, Southgate stuck by his trusty centre back and insisted there was ‘no logic’ to dropping the defender.

Maguire has been a figurehead of Southgate’s England side since the 2018 World Cup and has generally performed well for his country.

But it was a gamble for the England boss to call up the United captain given his recent lack of form at club level and Southgate undoubtedly based his pick on Maguire’s previous form for the Three Lions.

The 29-year-old will be watched like a hawk by everyone but none more so than Southgate who will be testing to see if his woes are limited to Ralf Rangnick’s side or if Maguire could risk his spot in Qatar.

Jordan Pickford has been England’s No 1 for the last two major tournaments and after saving two of Italy’s spot-kicks in the Euro 2020 final he looked set to keep his place.

But Aaron Ramsdale’s form at Arsenal this season has put the Everton shot-stopper’s place in jeopardy.

Pickford has experienced club struggles this season as the Toffees have spiralled into a relegation battle.

The Merseyside outfit have kept just five clean sheets in the Premier League this season which has left them sitting just three points above the drop zone.

Fortunately for Pickford, he has been given a reprieve from the Gunners goalkeeper breathing down his neck as Ramsdale was forced to withdraw from the squad this international break due to a hip injury.

The 42-capped England goalkeeper will now be looking to prove his doubters wrong and show Southgate that he can continue trusting him.

Can Southgate find the perfect blend of youth and experience?

The England boss has never shied away from giving young players the chance to step up.

The likes of Phil Foden, Bukayo Saka, Mason Mount and Jude Bellingham rejuvenated the England side during Euro 2020 last year.

But Southgate has freshened up his squad once again ahead of friendlies with Switzerland and the Ivory Coast.

This international break has seen the injection of fresh blood and the return of England’s youth, such as Ben White, Conor Gallagher and Declan Rice.

But Southgate knows he can still reply on members of the old guard, such as captain Harry Kane, to steady the ship with their experience.

Even the majority of the Three Lions’ younger players have a major tournament under their belts, which offers Southgate the perfect blend of youth and experience.

Getting the best out of Grealish

Jack Grealish is heading into the break with a point to prove. He was a fan favourite throughout England’s Euro 2020 campaign and his displays earned him a £100million move to Manchester City.

But he has failed to live up to that price tag during an underwhelming first campaign for Pep Guardiola’s side.

A mere two goals and two assists have left him at risk of slipping out of Southgate’s starting XI.

But a return to the England camp could give the forward the boost he needs to find his form from last summer.

For the second season running, Bruno Fernandes is the only player in the Premier League who creates chances from open play more frequently than Grealish.

But his own finishing has been wasteful throughout the campaign with his woeful goal tally to show for it.

Playing alongside a centre forward such as Kane could suit the former Aston Villa captain more than Pep Guardiola’s style of play.

Grealish’s creativity will be useful for providing opportunities for the Three Lions captain to slot away, rather than putting pressure on himself to finish.