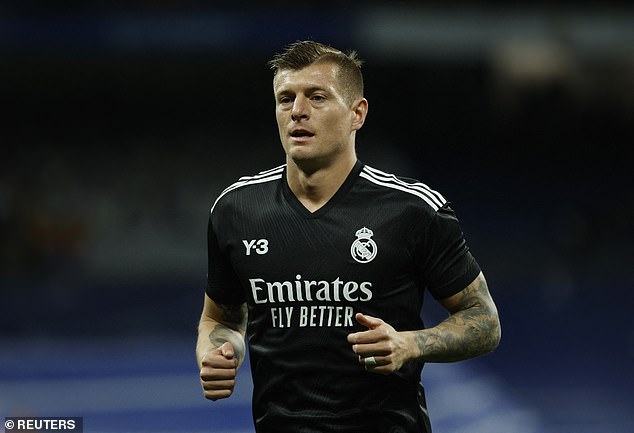 ‘I was bleeding but I didn’t really notice’: Toni Kroos recalls Real Madrid’s ‘bitter’ El Clasico thrashing, as he reveals he picked up an injury and was dragged in for a doping test opposite victorious rival stars

Real Madrid midfielder Toni Kroos has opened up on the extent of his side’s dramatic El Clasico defeat at the hands of fierce rivals Barcelona.

The LaLiga leaders were left stunned and deflated after the 4-0 thrashing at the Bernabeu, and Kroos was hauled off at half-time following his chastening display.

However, his misery did not stop there, with the veteran midfielder dragged in for a doping test which saw him sat across from members of the opposite side.

Kroos – who joined Madrid back in 2014 – also discovered that he had suffered an injury during the one-sided showdown, which required stitches.

Describing the encounter as ‘bitter’, the 32-year-old recalled the events on Einfach mal Luppen, the podcast he hosts alongside his brother, Felix.

‘I had a wound and they had to sew up my tibia with three stitches,’ Kroos said.

‘I saw that I was bleeding but I didn’t really notice it in the game.

‘In addition to the result and the injury, my night was over when the doctor informed me that I had a doping control.

‘That rounded off the night, sitting there for an hour and a half in doping control.

‘I found myself with Gerard Pique and Jordi Alba. We don’t speak. Vinicius Junior and I were the losers and I was looking forward to getting out of there.’

But despite the setback, Madrid remain in pole position in the title race – with Carlo Ancelotti’s team nine points clear of Sevilla and 12 ahead of Barcelona.

They return to action against Celta Vigo on April 2 after the international break, and Kroos is keen for his team-mates to respond in stirring fashion.

‘We have to raise our heads again,’ he added.

Days after the humilation, Kroos has urged Madrid to respond in perfect fashion against Celta

‘Anyone would have signed at the start of the season to be where we are.

‘The season has been very good so far, we are doing very well and there are still two months left where we cannot allow what has happened to change our course.

‘We have a lot of opportunities for titles.’