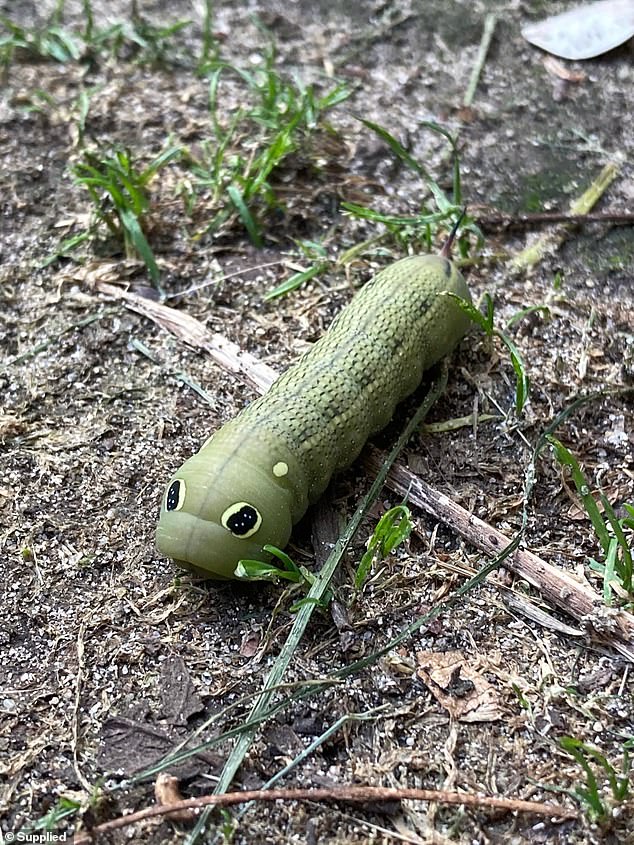 Aussies lose their minds after ‘the world’s most adorable caterpillar’ is spotted in a mum’s backyard: ‘This can’t be real’

A Victorian mum was thrilled to find what hundreds dubbed ‘the most adorable caterpillar in the world’ in her backyard.

‘My daughter found this amazing caterpillar in our yard,’ she shared in a popular Facebook group. ‘I’ve never seen anything like it in Australia.’

Though she first believed the insect to be a Saltbush Swallowtail Caterpillar, many finally identified it as a Vine Hawk Moth.

‘I was so sure this was plastic!’ a woman commented on the post. ‘This can’t be real.’

‘This looks like a Pokemon,’ added another. ‘My son has a stuffed toy that looks just like it – I’m sure if he saw this picture he would want one as a pet.’

The disbelief amused the mum, who confirmed the little insect was indeed real and crawling along.

‘It’s real, I swear!’ she wrote in the comments. ‘The little thing was peacefully nibbling on our grapevine.’

‘I have a whole swarm of them in my backyard,’ added another woman. ‘They’ve completely destroyed my Peace Lillies – but they look so cute!’

Vine Hawk Moths originate from Africa and Asia but have excellent flight capabilities that have seen them migrate to parts of Australia.

As a species, they are non-toxic and are harmless to people as well as pets.

They are mostly seen in suburban gardens in Eastern and Northern Australia where they are able to establish vast populations by feeding on backyard plants such as Peace Lillies and grapevines.

The ‘eyes’ that appeal many are actually body patterns which are meant to confuse predators and make the insects look like snakes.