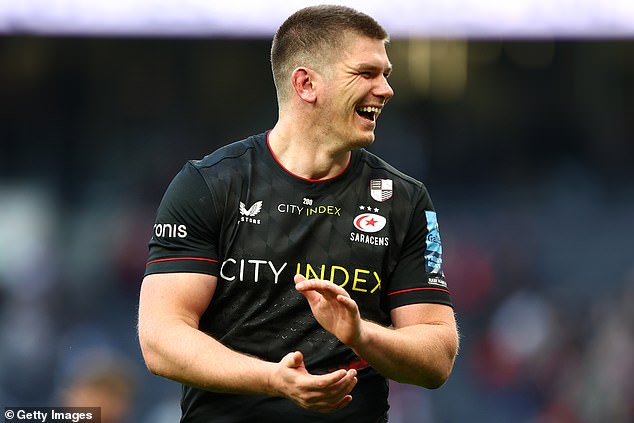 Owen Farrell’s injury-hit season suffered another blow after he was ruled out of Saracens’ trip to Sale on Friday night.

Farrell was named England captain for the Six Nations in January but missed his team’s underwhelming Championship campaign to have surgery on a ‘freak’ right ankle injury.

The 30-year-old, who also had surgery on his left ankle after a suffering a similar injury against Australia in November, was back on club duty against Bristol last Saturday.

Farrell kicked 12 points in his team’s win at Tottenham Hotspur Stadium, but his return has lasted just one match. He was removed from the field in the 70th minute of the Bristol game for a head injury assessment and replaced by Sean Maitland.

Saracens director of rugby Mark McCall confirmed after the match that Farrell had passed rugby’s head injury protocols, but he has not done so this week. As such, he has not been passed fit to face Sale and continues to be monitored.

England hooker Jamie George will step up to captain Saracens instead with Alex Goode replacing Farrell at fly-half. England internationals Maro Itoje, Nick Isiekwe, Elliot Daly and Max Malins all join George in the Saracens side. Itoje starts on the flank rather than at lock.

England centre Manu Tuilagi – who also missed the Six Nations – will make his latest comeback against Saracens. He had been due to start the round three clash with Wales, but suffered a hamstring injury in training. Tuilagi is on the Sale bench with another Test cap in scrum-half Raffi Quirke.

South African World Cup winners Faf de Klerk and Lood de Jager both start for Sale, but their exits from the Manchester club will be confirmed next week.

While De Klerk and De Jager are moving on, Sale have managed to hold on to South Africans Akker van der Merwe and their Du Preez contingent of Daniel, Jean-Luc, JP and Robert.

But Rohan Janse van Rensburg could yet switch continents with cash-rich Springbok side Sharks in the hunt for his signature.

All four players are back in training with Quins after being given a week off following the end of the Six Nations and are available for selection.

Sunday’s game between Quins and Irish will be refereed by French official Mathieu Raynal after a request from European rugby bosses.

The move is designed to help Raynal get used to an all-English club affair ahead of him taking charge of Sale against Bristol in the last 16 of the Heineken Champions Cup on April 9.

Raynal is the first French referee to take charge of a Premiership match in nearly a decade since he himself refereed the game between Irish and Northampton Saints on October 6, 2012.

De Klerk is not the only big-name South African heading to Japan with Damian de Allende poised to join him in the Far East. De Allende confirmed this week he is leaving Munster and not staying in Europe.

Sportsmail understands Panasonic Wild Knights are the leading contenders to sign the centre.

De Allende previously played for the Wild Knights under their current head coach Robbie Deans before moving to Ireland and the pair are keen on a reunion.

With Japan centre Dylan Riley and former New Zealand age group star Vince Aso having just arrived at the Wild Knights, a switch for De Allende could be dependent on the future of Hadleigh Parkes. Former Wales centre Parkes, now 34, has been with the Wild Knights for the past two seasons after finishing his international career.

Clubs in Japan’s League One are only allowed to field three foreign Test players at any one time. Deans is also looking for a new lock after former Saracens, England and British & Irish Lions second row George Kruis confirmed his intention to retire at the end of the current Japanese campaign. Former England lock Dave Attwood will re-join Bath from Bristol for next season.