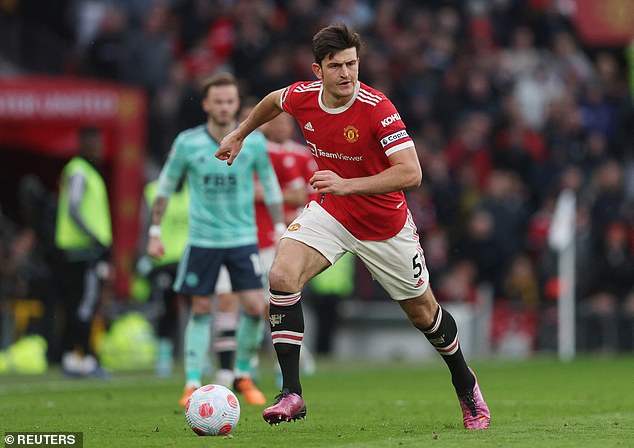 RIATH AL-SAMARRAI: Man United’s abject draw with Leicester was painless for Harry Maguire, he showed signs of life and made no mistakes against his former club… small glories count and this was one

By Raith Al-samarrai For The Mail On Sunday

In his season of 1,000 cuts, this will count as a painless day for Harry Maguire, even without winning. That is to say he faced considerable abuse in his workplace, but blessedly it came only from fans of the other side.

Perhaps that is how we must measure his progress for now, this period when trips to his own corner have too often carried the risk of a dunking in the spit bucket.

Goodness, look at his previous two games before he reached the safer haven of Manchester United’s 1-1 draw with Leicester on Saturday.

Against Atletico Madrid, prior to the international break, the United fans cheered his substitution; against the Ivory Coast, he was booed by the England supporters before the game even got going. Rough times, indeed.

So small glories count and this was one. They howled at him from the Leicester end, really pelted him with verbal fruit. But on a day when Ralf Rangnick effectively implored the United fans to show him some warmth via his programme notes, they did.

He was cheered off the bus, he was cheered through his warm up, and in response he gave them something to cheer about across the game. Whisper it, but he was possibly United’s best player. They were poor, he was not, and that has to be enough for now.

That is not to say he was exceptional. He wasn’t Jaap Stam. Or Nemanja Vidic. Or Rio Ferdinand. Or that calibre of player they used to know around here.

Whisper it, but he was possibly United’s best player, because while they were poor, he was not

But then he never is, even if he is rarely as bad as folk say, either. Sure, he makes too many errors, particularly this season, and he has never looked especially comfortable under the weight of what he cost.

But how many among this team has? Possibly that has been his problem – that he has become a lightning rod for the wider, deeper malaise of the era; the £80m signing that was too much of a slow-moving target, recently more than ever.

Before this one, Gary Neville spoke of Maguire needing ‘the season to end’. Hard to argue with that, but again, it goes for the collective. At least in this game he showed signs of life.

He was solid, and rising to good when he went to ground to tackle Kiernan Dewsbury-Hall

To begin with, he was solid, and rising to good when he went to ground to tackle Kiernan Dewsbury-Hall and once more in intercepting a dangerous ball on its way from James Maddison to Kelechi Iheanacho.

He has a habit of looking better in Raphael Varane’s company and this was shaping into one of those matches. His every touch was booed by the Leicester corner, but tellingly there were no mistakes with any of them. Good for him.

He opened the second period by cutting out a cross from James Justin, then twice threw off Iheanacho with feints before lunging into a big block on Harvey Barnes. His own fans roared; Leicester’s reiterated that he should just ‘f*** off’.

Their stance across the past three years since he left Leicester has arguably been the most consistent of any party in the whole affair.