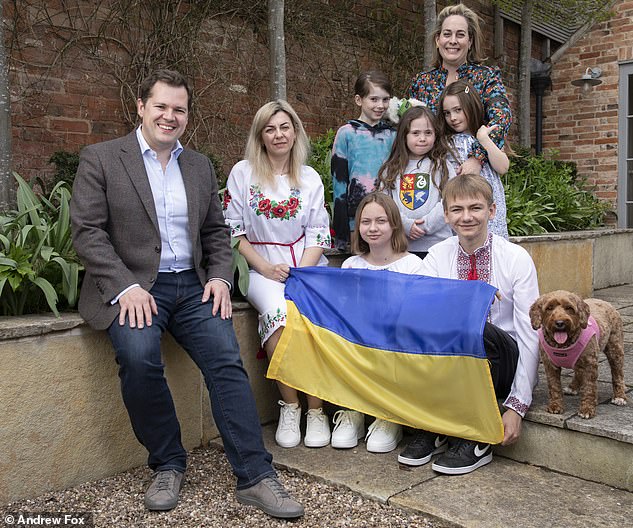 A Former Cabinet minister has become the first MP to welcome a Ukrainian family into his home under the Government’s refugee visa scheme.

They are now living with his family in his constituency home in Newark, Nottinghamshire.

The former housing secretary, 40, said that he found it ‘emotional’ and ‘humbling’ when he finally met the refugees on Monday after applying to host them three weeks ago.

The former housing secretary, 40, said that he found it ‘emotional’ and ‘humbling’ when he finally met the refugees on Monday

‘They are children of not dissimilar ages to ours, and a mother who’s left her husband back home and made this extraordinary decision… to leave home and come to another country in order to protect her children.

‘It was quite emotional. I have to say they’ve been absolutely lovely to us and we’ve enjoyed it so far,’ he said.

He admitted that Home Office red tape, which has seen the visa scheme blighted by shambolic delays, had ‘tested the patience’ of both sponsors and the refugees fleeing the war.

Mr Jenrick told Chopper’s Politics, The Daily Telegraph’s podcast: ‘Truth be told… It has been a bumpy start, it has taken too long to get visas. For us it took about three weeks to get all three visas approved.’

However, he insisted he had not pulled any strings to speed up the processing of his own application.

But Mr Jenrick did call on officials to stop forcing children to fill out separate applications to come to the UK.

He also said the lengthy forms, which take refugees hours or even days to fill, should be completed in Ukrainian to speed up the operation.

‘I do think the process has been overly bureaucratic and I think the Home Office often falls into this trap,’ he added.

‘There were simple things that we could and should have done from the outset, like having the form in Ukrainian, for example.

‘And I’m not sure whether you need to be doing checks on minors who are extremely unlikely to be a threat to this country.’

But Mr Jenrick said it was right that British hosts were tasked with matching with their own refugee families.

‘There are limits to the role of the state and as a country we have so much to offer when individuals and civil society come together,’ he said.

He added that he was confident the country would eventually look back on the scheme ‘with pride’ as the Home Office was getting ‘over the bumps’ and the applications were being processed faster.

The Ukrainian family, who connected with the Jenricks through a friend, had spent seven hours queueing at the border to enter Poland before they could fly to the UK.

Mr Jenrick said: ‘It’s been very rewarding to see them feeling safe at last after a very traumatic experience and beginning to stabilise them and rebuild their lives.’

He said the family would be living in their home in the town of Southwell admitting: ‘It will be a bit busy, because we have three children and two dogs… but it seems to be working so far.’

The MP said he is not sure how long his family would be staying as their father has remained in Ukraine to support the war effort, adding: ‘We want to support them for as long as they need it.’

Mr Jenrick is thought to be the first MP to welcome a Ukrainian family under the new scheme.

Victoria Prentis, the environment minister, has taken in Vika, a 25-year-old refugee, under an existing visitor visa programme.