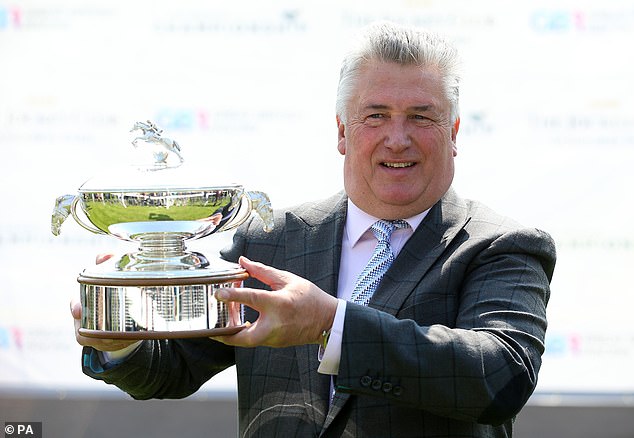 Paul Nicholls is in good nick for record haul as he targets becoming the first man to train 4,000 winners over jumps following superb showing at Sandown… as his prize money for the season nears £3million

By Marcus Townend For The Mail On Sunday

Trainer Paul Nicholls has set his sights on becoming the first man to train 4,000 winners over jumps after securing his 13th Trainers’ Championship with a show-stopping 410-1 five-timer on Jump Finale day at Sandown.

Wins with Greaneteen, who landed the Grade One Celebration Chase for the second year running, Saint Calvados in the Oaksey Chase, McFabulous in the Select Hurdle, Knappers Hill in the novices’ handicap hurdle and Samarrive in the concluding handicap hurdle took Nicholls to 142 wins for the season and 3,454 wins in a training career which started in 1991.

The 2021-22 season has not been straight-forward for Nicholls, who failed to have a winner at the Cheltenham Festival, but he continues to set the standard to aim at in British Jump racing despite the constant challenge of Nicky Henderson and the increasingly potent challenge to his crown from his former assistant Dan Skelton.

Nicholls, whose prizemoney haul for the campaign has topped £2.9million, now needs two more titles to equal the record of 15 set by Martin Pipe. Nicholls, 60, said: ‘I’d love to train 4,000 winners. No jump trainer has done that. That would be nice. It is doable if I keep going and I still absolutely love the challenge. I am no different to how I was 20 years ago. Championships are the end product of a lot of hard work by a lot of people.

‘It has been a bit of a tough season. We were a bit quiet after Christmas when the horses were not running as well as I would have liked but we have still ended up with more than 140 winners and a huge amount of prizemoney.

‘Any season when you’ve won the championship you’ve done well. The teams below you will always try to catch you and achieve what you have done.’

Sights are already set on next season, with Sandown specialist Greaneteen likely to try to win back-to-back editions of the Tingle Creek Chase back at the track in December, while Nicholls believes there is more to come from Saint Calvados. Finals day opened with Brian Hughes being crowned champion jump jockey for the second time but the afternoon belonged to colleague Harry Cobden.

Nicholls’ stable jockey partnered four of his boss’s winners, leaving him one shy of his century for the season.

It was contrast to 12 months earlier, when Cobden had to watch on as Nicholls had three wins while he sat at home with a broken cheek and a fractured hand.

The feature bet365 Gold Cup eluded Nicholls and Cobden, their contender Enrilo pulled up behind Shark Hanlon-trained Hewick, the sixth Irish-trained winner of a prestigious contest first run in 1957.