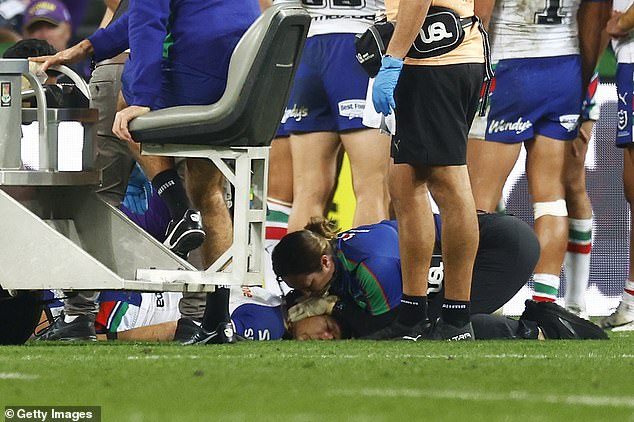 Dallin Watene-Zelezniak suffered a sickening head injury in the Warriors’ 60-point demolition against the Melbourne Storm on Anzac Day.

Early in the second half, the Warriors winger went up challenging for a high ball with Ryan Papenhuyzen, who secured possession to score his first try and Melbourne’s fourth of an extraordinary night.

As the Storm fullback scored, Watene-Zelezniak landed awkwardly and lost his balance, before his head collided with the knee of Nelson Asofa-Solomona as the Melbourne prop ran in to celebrate.

The brutal collision appeared to leave the Warriors winger out cold and the 26-year-old lay unconscious for several moments as the Warriors medical staff rushed onto the field to attend to him.

Fox League commentary team of Warren Smith and Greg Alexander were immediately concerned by the impact.

‘He [Watene-Zelezniak] collided with Bayley Sironen but as he fell he fell into the knees of Asofa-Solomona,’ Alexander said.

Smith noted the Warriors winger looked to be unconscious before he hit the turf.

‘You can see the look of concern on the face of Asofa-Solomona,’ he added.

Players from both teams looked visibly concerned for Watene-Zelezniak’s welfare, as doctors examined his conditions. The Kiwi speedster eventually regained his consciousness and was stretchered off the field.

Speaking after the game, Warriors head coach Nathan Brown confirmed the New Zealand international had suffered a severe concussions but was walking as normal.