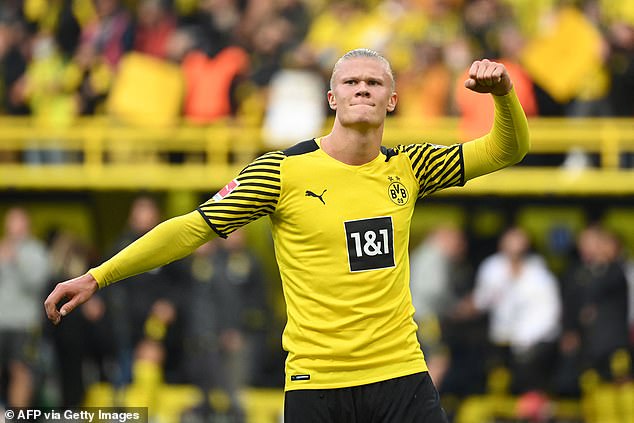 ‘Happy not to be running after this guy for the next couple of years!’: Aymeric Laporte leads Manchester City stars in welcoming Erling Haaland to the club – as overjoyed fans hail ‘the best signing of all time’

Manchester City fans have lauded Erling Haaland as the ‘best signing of all time’ after confirming a £51million deal for the Borussia Dortmund megastar.

The club released a statement on Tuesday afternoon confirming that a deal in principle had been agreed, with the 21-year-old set to receive £375,000-a-week on a five-year deal.

As expected, the signing of the world’s most in-demand striker has been hailed by the club’s supporters, as well as defender Aymeric Laporte.

The Manchester City defender admitted that he’s relieved that he won’t be on the opposing side of Haaland in the Premier League.

He wrote: ‘Happy not to be running after this guy for the next couple of years. Welcome Erling.’

Riyad Mahrez gave his backing to his team-mate as he retweeted the Frenchman’s message.

One fan was quick to throw out a counterpoint to Laporte’s comment, tweeting: ‘Sorry to say that training just got a lot tougher Aymeric.’

Following the departure of Sergio Aguero and failure to sign Harry Kane last summer, the reigning Premier League champions have been playing without a No 9 this season.

City are currently favourites to retain their title and fans are excited about the prospect of adding Haaland to the mix.

Since joining Dortmund in January 2020, the Norwegian international has scored 85 goals in 88 appearances across all competitions.

In response to City’s statement on Twitter, one fan wrote: ‘Just replying to the announcement of the best signing of all time.’

Haaland’s father, Alfe-Inge, played for Manchester City from 2000 to 2003 where he made 38 appearances.

One fan shared a picture of a young Haaland in a Man City shirt with the caption: ‘Back where he belongs.’

Another Twitter user shared a picture of the young striker in the tunnel at the Etihad Stadium when Borussia Dortmund played them in the Champions League, with the message: ‘He’s here and he’s perfect.’

Another supporter described Haaland as one of the top two youngsters in world football, and that the club’s pull is ‘unbelievable’.

On the flip side he will be a big loss to Borussia Dortmund, who already lost Jadon Sancho to the other half of Manchester last season.

A Dortmund fan wished him well by commenting: ‘Gutted that he left us with mixed feelings, but I’d rather focus on the positives and what he’s done for us.

‘He’ll became an iconic player and I’m glad we had him. I wish him the best, treat him well.’

The Premier League champions beat Real Madrid to his signature and were expected to part with £63m to trigger a release clause in his contract.

But they have secured Haaland for £12m less than that figure – similar finance to Barcelona’s signing of Ferran Torres in January.

His £375,000-a-week wage will put him in the highest bracket of earners among Pep Guardiola’s squad and around the same level as talisman Kevin De Bruyne.

City have negotiated with Haaland’s father, former player Alfie, and lawyer Rafaela Pimenta. Agency fees and bonuses will take the outlay to £85m.