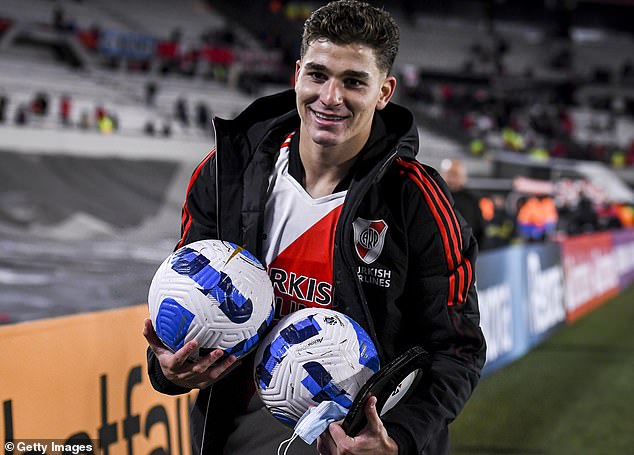 Julian Alvarez will become a SUPERSTAR under Pep Guardiola at Manchester City, claims Aston Villa No 1 Emiliano Martinez… with the Argentina goalkeeper revealing he made his pitch to get the 22-year-old star to join him at Villa Park!

City signed Alvarez in January for just over £14million on a five-and-a-half-year deal, with the 22-year-old loaned back to River Plate for the rest of the season.

‘We know how talented he is,’ Martinez said in a press conference ahead of Argentina’s game against Italy at Wembley on Wednesday.

Julian Alvarez has all the talent to become a superstar at Man City, says Emiliano Martinez

‘Obviously I wanted him to come to Villa, to be fair.

‘I told him before the Copa America to join us. He is a top lad, very humble, a hard worker and I believe he’s going to be a superstar.’

Asked if Alvarez could prove as successful at City as fellow Argentinian Sergio Aguero, Martinez added: ‘Obviously, it’s hard to compare him to Aguero.

‘He’s got a lot to prove but he’s going to work with one of the best managers in the world right now (Pep Guardiola).

‘He’s very loyal to the team when he’s there so I believe he’s going to make it.’