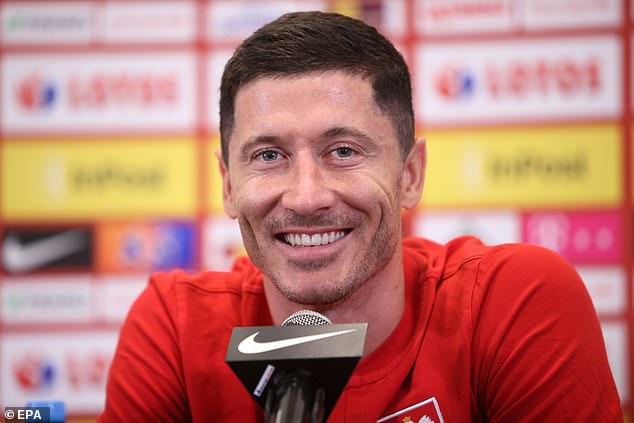 Robert Lewandowski’s full focus is on beating Wales despite his determination to leave Bayern Munich, according to Poland boss Czeslaw Michniewicz.

Lewandowski has one year left on his Bayern contract, but on Monday the striker described his situation there as ‘over’ amid strong links of a summer switch to Barcelona.

Michniewicz confirmed the 33-year-old, who has scored 344 goals in 375 Bayern appearances, will start Poland’s Nations League opener against Wales in Wroclaw on Wednesday.

He said: ‘Robert will be on the pitch from the very first minute. From the very beginning when I first met Robert in Munich to now I am not seeing any change in his behaviour.

‘This medium noise, we will see what happens. But he has been busy in training and wanted to beat all the players in the small-sided games.’

Lewandowski has twice won the best FIFA Men’s Player Award during his eight-year Bayern career, and his pledge to quit the club has enraged the German giants.

Bayern chief executive Oliver Kahn accused Lewandowski of showing a lack of respect to his employers, saying ‘appreciation is not a one-way street’.

The Poland forward (L) has one year left on his Bayern contract, but on Monday the striker described his situation there as ‘over’ amid strong links of a summer switch to Barcelona

On Lewandowski’s future, Michniewicz added: ‘He said he hopes this matter will end very quickly.

‘If this is uncertain it will have impact on you. He says he wants to change club, Barcelona or any other I don’t know.

‘I’m not concerned about it. I know Robert will take a good decision. He has a lot of advisers, he is an experienced player and an experienced man, and plays at the world level.’

Meanwhile, Wales are looking to rest the likes of Gareth Bale, Aaron Ramsey and Joe Allen ahead of Sunday’s World Cup play-off final against Scotland or Ukraine

Michniewicz said: ‘I plan to use the 23 players to get the optimum out of the situation. We know Wales will make changes because they have a bigger match on Sunday.

‘We had this game in March and we expect them to do this, that is normal. But they will still have a lot of physicality, good runners and advantages in the game.

‘It doesn’t have significance because we analyse the team as a whole.

‘We have to concentrate on ourselves and build our football. We have fantastic potential and the team is capable of doing it.’