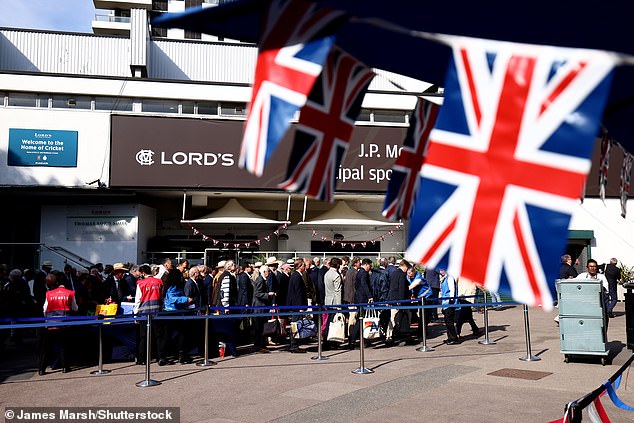 ‘An absolute s***show!’: Cricket fans fume at huge queues outside Lord’s to get into England vs New Zealand Test with many waiting over an hour and missing opening wickets

Frustrated cricket fans complained about missing the start of the England vs New Zealand Test match after huge queues to get inside Lord’s.

One supporter who’d waited over an hour to get through the gates took to Twitter to brand the situation as an ‘absolute s***show.’

Another tweeted their annoyance at listening to the pre-match national anthems over the wall after delays and missing the first ball.

A good number are likely to have missed the early James Anderson breakthrough for England after New Zealand won the toss and opted to bat first.

Andrew Spooner replied to an announcement of the two line-ups on the Home of Cricket Twitter account by writing: ‘The fans are not however. Looooooong queues to get into the ground. Got here at 10. Unlikely to see the first ball. Sigh.’

Paul Townley tweeted a picture of the lines and wrote: ‘Absolute sh*t show getting into Lord’s this morning. Will be an hour from joining the queue before I get in. Big prices and treating fans like fools.’

He said he joined the queue at 10.10am but didn’t get inside until 11.05am, describing the situation as ‘pretty shambolic’.

Julia Prague wrote: ‘Not impressed @HomeOfCricket – not managed to sell out tickets for the test as so expensive and now we’re all stuck outside queuing in your new bonkers new gate system despite getting to the ground with plenty of time. Hearing the anthems over the wall.’

A MCC spokesperson said: ‘Around half an hour before the start of play, there were longer than normal queues to get into Lord’s, for the Test match against New Zealand.

‘With gates opening at 9am for the match to start at 11am, we always encourage spectators to enter the Ground early.

‘In order to minimise congestion and after consultation with the Met Police and the ECB Head of Safety and Security, we made the decision to relax the search operation at the gates at Lord’s.’

Those late-arriving fans were likely to have missed an excellent start for England as Anderson took the wickets of Will Young and Tom Latham to on his return to the side to reduce New Zealand to 2 for 2.

It came after Lord’s came in for criticism over ticket prices amid the cost of living crisis with thousands left unsold over the first four days of the Test.

The MCC blamed the Queen’s Platinum Jubilee weekend and regular fans going on holiday for the sluggish sales, but fans said £160 prices for match tickets were the main cause as families tighten their belts.

The former England captain Michael Vaughan was also critical of the prices, tweeting: ‘Lord’s not being full this week is embarrassing for the game… Try and blame the Jubilee if they want but I guarantee if tickets weren’t £100-£160 it would be jam packed!!! Why are they so expensive???’

He added: ‘How about working out a way to get the tickets remaining at Lords to kids with a parent for £40 to make sure it is full… it’s the school holidays and lots of kids will be around to go to the Test match??’