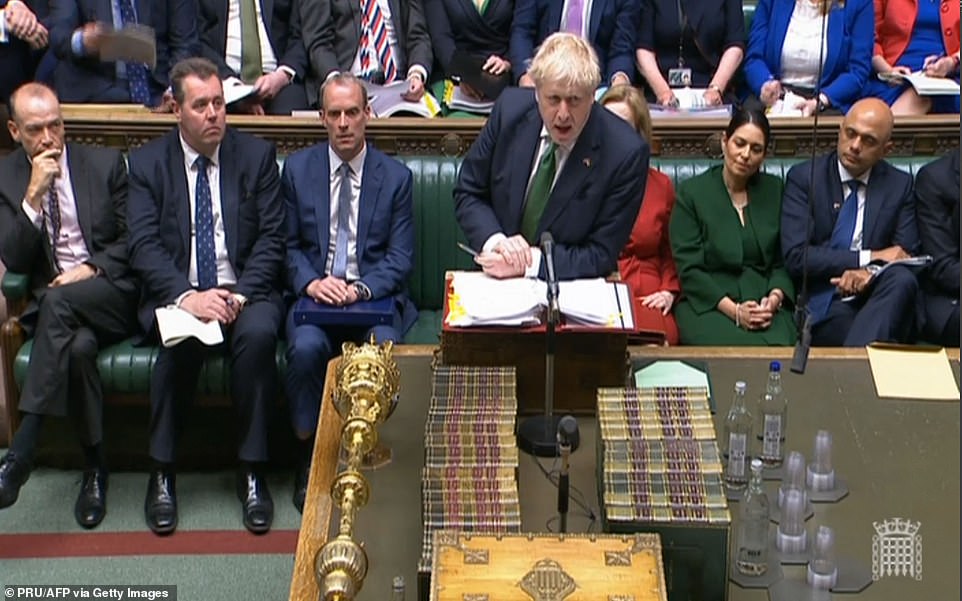 Defiant Boris Johnson swiped that Tory critics do not like the ‘big and remarkable’ things his government is doing as MPs lined up behind him at PMQs.

The premier was given a solid reception with cheers as he arrived in the Commons for the regular session – the first opportunity to take the temperature in the chamber since the confidence vote showdown.

But Mr Johnson responded to Labour jibes that the 148-strong revolt against him meant he was ‘loathed’ by insisting he has ‘barely begun’ and will focus on ‘delivering for the British people’.

‘In a long political career so far – barely begun – I’ve of course picked up political opponents all over and that is because this Government has done some very big and very remarkable things which they didn’t necessarily approve of,’ the PM said.

‘And what I want her to know is that absolutely nothing and no-one, least of all her, is going to stop us with getting on delivering for the British people.’

The omens are looking better for the premier, with Keir Starmer struggling to land any significant blows during their exchanges. Rebel ringleaders are admitting he has more time after seeing off the coup attempt in the secret ballot on Monday, albeit more narrowly than No10 had hoped.

When SNP Westminster leader Ian Blackford compared him to the Black Knight from Monty Python, the PM could be seen off-mic saying it was ‘not even a flesh wound’.

Downing Street has laughed off suggestions that rival Jeremy Hunt – who publicly called for the PM to quit – could be brought in as Chancellor to shore up Mr Johnson’s position. Speculation about a reshuffle to restore his authority also seems to have faded.

Rishi Sunak and Penny Mordaunt – the trade minister who had been on resignation watch during the drama this week – have both urged unity in articles today.

But ministers are under increasing pressure to the tax burden – on track to hit a record high – to restore confidence in the government.

Mr Johnson told Cabinet yesterday he wanted to get back to the ‘fundamental Conservative instinct’ of cutting taxes as the next general election approaches.

In a round of interviews this morning, Health Secretary Sajid Javid said many rebels were now ‘getting behind the Prime Minister’ after the vote.

‘It was a clear and decisive win for the Prime Minister, and speaking to colleagues after that vote yesterday, including some that I spoke to that publicly said they didn’t support the Prime Minister in the vote, but they’re democrats like all of us and they accept the result of the vote and they’re getting behind the Prime Minister,’ he said.

Boris Johnson (left today) will trade blows with Keir Starmer in the Commons at noon – but all eyes will be on his own benches for ongoing signs of dissent. Rishi Sunak (right) has pledged loyalty to the PM

In a round of interviews this morning, Health Secretary Sajid Javid said many rebels were now ‘getting behind the Prime Minister’ after the vote

Sajid Javid has insisted changing Tory Party rules to allow another confidence vote in Boris Johnson within a year would be ‘grossly unfair’.

Asked about the prospect, he told Times Radio: ‘I think most people would think if you sort of changed the rules it would be grossly unfair, it would be the wrong thing to do. So I wouldn’t support that.

‘We have very clear, transparent rules and that’s important, that they’re clear and transparent.

‘And if anyone wants to exercise the current rules, which they did, that’s totally their right and I respect my colleagues for that, but the decision has been made.

‘And I think what everyone wants to now see is that you end this sort of speculation and we just get on with the job.’

The developments came after Mr Johnson won Monday night’s bruising confidence vote by the narrower than expected margin of 211 to 148.

He stressed to Cabinet colleagues that delivering tax cuts would help produce ‘considerable growth in employment and economic progress’.

The PM also ordered ministers to bring forward new initiatives to slash Government spending in order to free up cash for tax cuts.

Mr Sunak has repeated his pledge to introduce ‘a range of tax cuts’ for business in the autumn in order to encourage investment.

But senior Tories warned it was now time to turn the rhetoric about cuts into reality in order to boost growth, help families with the cost of living and restore Tory fortunes. It came as:

Former Brexit minister Lord Frost said the PM needed to ‘change direction’ in the wake of the confidence vote.

He insisted: ‘We’re delivering an economic policy that’s not going to deliver prosperity and wealth. If he can change that he can get on to a different path and save his premiership and Government.’

The Tory peer told the BBC that increases in national insurance and corporation tax should be reversed. He said: ‘It is not Conservative to be raising taxes, and it is undermining growth and prosperity.

We need to improve productivity and investment, and not weaken it.’

Foreign Secretary Liz Truss said the Government’s agenda now had to include ‘getting taxes down and getting the economy going.’

At the Cabinet meeting, Mr Johnson said: ‘We are able now to draw a line under the issues that our opponents want to talk about.’

No 10 acknowledged that the tax burden is ‘higher than it has been’.

The PM’s spokesman said: ‘It’s always about getting the balance right and the Chancellor and the Prime Minister have been very clear that, as we move away from these unique challenges of the global pandemic and the war in Europe, the intention is to further reduce taxes.’

Mr Javid said he would like to see reductions ‘where they’re possible’, and this is something Chancellor Rishi Sunak will look at.

Asked if the Government will be moving towards tax cuts this year, especially in the wake of Boris Johnson being challenged in the confidence vote, Mr Javid said: ‘I’d like to see us do more on tax cuts and I’m someone just like, I think, every member of the Government, all (of) my colleagues, we want to see taxes as low as possible.

‘I’m pleased that there have been targeted tax cuts already. The recent Budget, I think I’m right in saying, (means) some 70 per cent of people, those that are lower paid, will pay less National Insurance than before.’

Put to him that overall the tax burden is rising, he said: ‘Because of the pandemic there’s been challenges to the public finances. I represent the biggest spending department because of health and the challenges in social care.

No10 sources ridiculed reports that Mr Sunak could be replaced by former foreign secretary Mr Hunt to steady the government.

Mr Hunt – who was runner-up to Mr Johnson in the 2019 leadership election and is expected to stand again if there is another contest – infuriated some in the Cabinet when he announced he would be voting for ‘change’ in the confidence vote.

However, the Telegraph said some of Mr Johnson’s allies were arguing that bringing back his rival into the Cabinet would help stabilise Mr Johnson’s leadership, heal rifts within the party while binding Mr Hunt to the PM’s agenda.