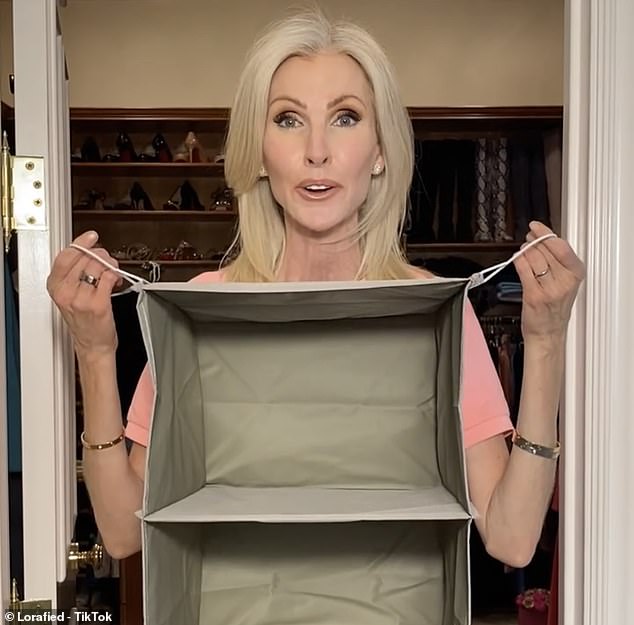 A (very) well-travelled mum has revealed a handy hack for saving time on packing and unpacking suitcases – place holiday outfits in a wardrobe divider.

Lora McLaughlin Peterson shared the ‘one-step pack and unpack travel hack’ in a viral TikTok video, which shows her filling a wardrobe divider with folded clothes and collapsing it into her carry-on suitcase. When she arrives at her destination, she simply takes out the divider and hangs it up.

The 52-year-old former CBS news correspondent, who lives in Los Angeles, tells MailOnline Travel that she shot the video when she was travelling to New York – a place she often visits with her family.

In a viral TikTok video, Lora McLaughlin Peterson, who travels all over the world with her family, has revealed a handy hack for saving time on unpacking clothes – using a wardrobe divider to keep them organised

Mum-of-three Lora explains that the idea came to her when her eldest daughter brought home a ‘Shelfpack’ suitcase – ‘which is basically a suitcase with a built-in pop-up of shelving for your clothing’.

Lora, who has built up a following on social media as a ‘hack expert’, says: ‘My way is the much more affordable option that doesn’t leave you committed to permanent shelves in your luggage. You use it when you need it.’

In the video, which has now racked up 120,000 views on TikTok, Lora explains that she’s placing an outfit for each day of the week on a different shelf of the wardrobe divider. ‘When you arrive at your destination, pull it out and hang it up,’ she tells the camera.

When she arrives at her destination, Lora simply takes the divider out of her suitcase and hangs it up. ‘I can get a lot in there: jeans, pyjamas, underwear, socks, sweaters, anything that can be folded,’ she says

‘[The clothes divider] works with any suitcase, as you can buy the size that fits the luggage you already own,’ Lora says

Travellers won’t lose out on suitcase space, according to Lora, who says: ‘I can get a lot in there: jeans, pyjamas, underwear, socks, sweaters, anything that can be folded.’

She has since used it when packing for trips to London and the Bahamas.

What has the reaction been like on TikTok? ‘Overwhelming positive,’ Lora, who has amassed 177,000  TikTok followers to date, reveals.

She notes that a wardrobe divider is ‘one of those things that we all have access to and it’s budget-friendly’.

‘It works with any suitcase, as you can buy the size that fits the luggage you already own,’ she says.

Lora has used the hack when packing for trips to London and the Bahamas. She has built up a fan base on social media as a ‘hack expert’, amassing 177,000 TikTok followers to date

However, there is one downside to the hack, Lora admits, saying: ‘If you don’t have a lot of folded items, this may be tricky.’

Packing aside, Lora – who also previously worked as a reporter for CNN, Court TV and KABC – has another nifty travel tip up her sleeve. She says: ‘My best advice to anyone anywhere in the world is to “go left”.

‘Since most of the world is right-handed, folks tend to favour the lines on the right, whether it’s for the security checkpoint at the airport, an escalator line, a line at the grocery store or museum, always go to your left, it pays off the vast majority of the time.’

‘[It] works wonders at Disneyland,’ she adds.