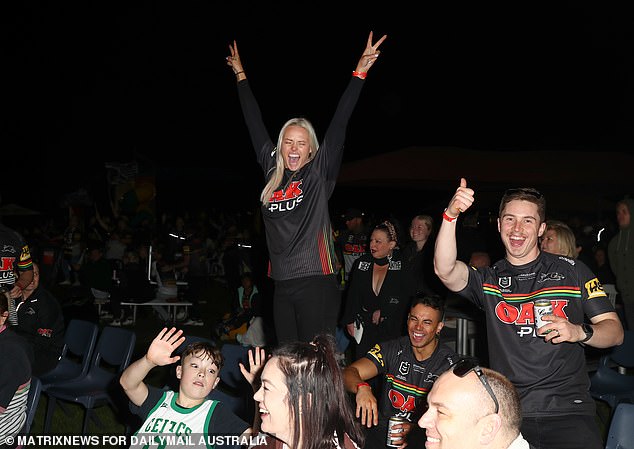 The party has well and truly started for Penrith fans after the Panthers stamped themselves as one of the greatest sides in NRL history with a thumping win over Parramatta Eels.

Entering Sunday’s final looking to become one of the few teams to achieve back-to-back premierships, the Panthers absolutely stormed past their western Sydney rivals to clinch a 16-point win at Accor Stadium.

Their victory has onset debate as to where they stand in the pantheon of great NRL sides, but for now Penrith fans are basking in their side’s latest triumph.

Over at the Panthers Leagues Club, supporters were in a jubilant mood, celebrating arm in arm as drinks were flowing. One very merry fan removed his top and waved it above his head in wild scenes.

Meanwhile, at the Parramatta Leagues Club, the mood was far more dejected, with disappointed fans heading home early, having been put through a torrid evening of football.

An elated Nathan Cleary said it was an honour to play for the Penrith fanbase shortly after their 28-12 victory.

‘I think our first half was the best we have ever played. I was thinking that today when I woke up,’ he said on Channel Nine.

‘I thought we have put some really good seasons together but we have never really come off. That’s the best game we could play. I think the first half was just about that.

‘It is a privilege to put on Penrith jersey. Everyone is starting to understand to represent the area, the community gets right behind it. Again I’m so blessed.’

Eels coach Brad Arthur said: ‘They (Penrith) played too well in the first half and too fast for us.

‘I said to the boys right now is not the time to review or dissect, we just got beaten by a better team.’