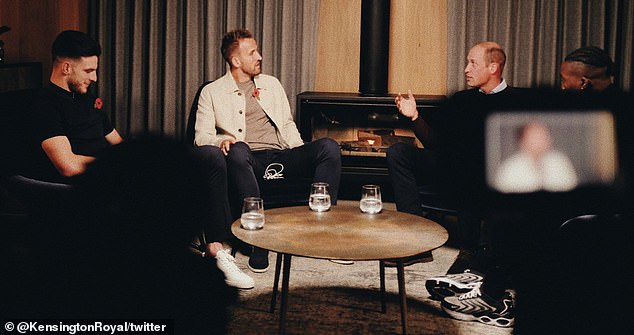 England’s latest signing? The Prince of Wales hints at a special edition Game of Fives with football stars including Harry Kane ahead of the World Cup

The Prince of Wales teased football fans on Sunday, posting a photo of himself chatting with some of England’s biggest stars ahead of the World Cup.

Posting from the @KensingtonRoyal account on Sunday afternoon, Prince William posted a snap of himself with England players – including captain Harry Kane – and the caption ‘coming tomorrow’, alongside a pair of emoji eyes.

Football media company Copa90 posted simultaneously, adding a photo of a director’s clapperboard, and the royal lined up alongside the football stars, adding the words: ‘A Royal episode of Game of Fives, coming tomorrow’ and later suggested that an ‘incredible conversation’ had taken place.

In another shot, William, 40, is seen apparently deep in conversation with the England players.

Prince William, 40, shared an image of him appearing deep in conversation with England football stars – just two weeks before the World Cup in Qatar

Prince William has been president of the FA since 2006 and is a passionate football fan. Last month, a source said Prince William may look at travelling to the World Cup in Qatar if England reach the final.

The Prince of Wales, who is president of the Football Association, ruled out attending the tournament due to a ‘busy winter schedule’.

However, it is understood his office may look at making arrangements if England reach the final on December 18.

Yesterday, the Princess of Wales cheered England to victory as she dodged the rain at the Rugby League World Cup Quarter Final after taking over the royal as patron from Prince Harry.

The mother-of-three, 40, said she was ‘proud to be their patron’ after both the men and women’s teams  triumphed over Papua New Guinea and Canada DW Stadium in Wigan this afternoon.

Dressed in an Alexander McQueen coat and burgundy turtleneck, the Princess finished off her chic ensemble with a woolen red poppy to show her support for the Armed Forces ahead of Remembrance Sunday and some £425 pearl earrings by UK designer Annoushka Ducas, which she’s owned since 2012.

Styling her brown hair in her signature loose waves, the Princess (pictured on the pitch ahead of kick-off) finished off her chic ensemble with a woolen red poppy to show her support for the Armed Forces ahead of Remembrance Sunday and some pearl earrings.

During the half-time break, Kate spoke with the women’s team – who triumphed Canada earlier in the day. Canadian captain Gabrielle Hindley (second left front row) was also invited to speak with the Princess

While the England men’s team won 46-6 to Papua New Guinea, the women’s team beat Canada 54-4 earlier in the day.

She told players: ‘It’s amazing to see the women’s game being played at the same time, alongside the men’s game.’

‘I’m so in awe of all of you, you’re running day jobs as well as training, as well as family life and things like that, it’s extraordinary. You juggle everything.’