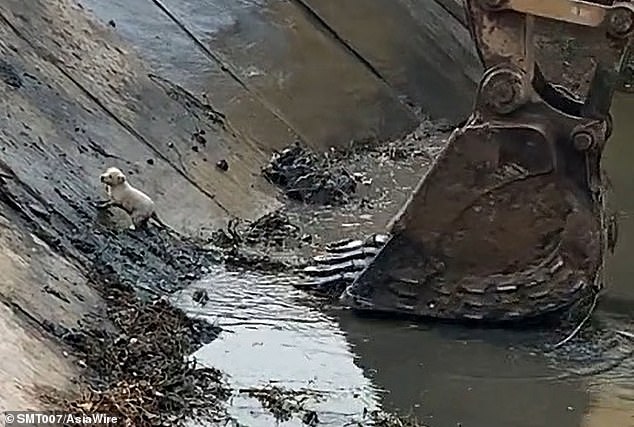 A close claw! Moment puppy who fell into a river is scooped up by a digger

By Abi Turner For Mailonline

This is the nail-biting moment one lucky puppy was rescued from a river in central China, after being scooped up by a digger.

The small dog was saved by a man who carefully picked him up out of the water using an excavator.

The adorable pooch had fallen into the water after getting too curious about the digger’s work, dredging the waterway, in the city of Zhengzhou, Henan Province on 24 November, according to local media.

Luckily, the excavator operator was quick-thinking and speedily lowered his scoop to see if he could grab the little pup to safety.

This is the nail-biting moment one lucky puppy was rescued from a river in central China, after being scooped up by a digger

Adorable footage, filmed by passer-by Mr Liu, of the rescue shows the operator using incredible precision to position the scoop behind the pup without injuring it.

Then delicately he brings it forward trying to hold the dog so he can pull him out.

After one false start, where the little dog fell from the scoop’s claws, the operator managed the grab the pup a second time and successfully bring him to safety.

Bringing him safely back to land the digger deposited the very muddy, but otherwise healthy, passenger on dry land.

The puppy was gently scooped up the digger’s claws, after one failed attempt, that saw him nearly roll back down the wall

Mr Liu said that he felt touched after seeing that there are still many good people.

After the puppy was rescued, Mr Liu said he learned that it was actually a stray, but kind locals decided to take it in.

He shared the footage of the rescue on Douyin, the Chinese version of TikTok.

Internet users were moved by the video, with one even saying: ‘When the heart is good, steel teeth and iron claws can be so gentle.’