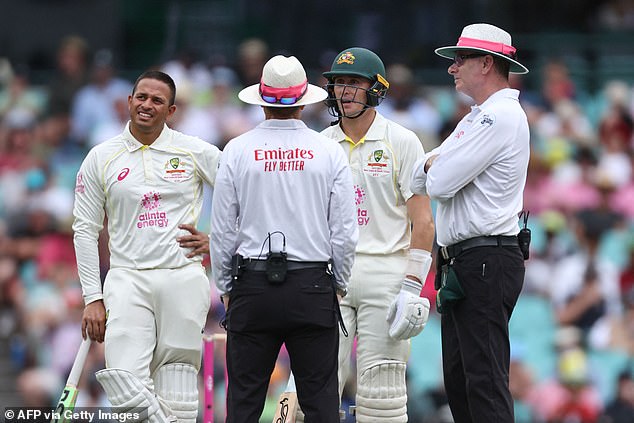 Ben Stokes has weighed in on the controversial umpiring decision that handed Marnus Labuschagne a lifeline in Sydney, insisting that the ICC should abandon the use of ‘soft signals’ in cricket.

Labuschagne was seemingly inexorable after lunch at the SCG on Wednesday, punishing Kagiso Rabada and Keshav Maharaj on his way to 70.

But the Proteas appeared to have the breakthrough they were after when Labuschagne edged a Marco Jansen delivery to Harmer, who took a low grab in the slips.

Labuschagne refused to budge, though, and umpire Paul Reiffel gave the soft signal of out as he sent the catch for review.

Third umpire Richard Kettleborough examined several replays and was eventually satisfied there was enough evidence to overturn the soft signal, judging Labuschagne not out as the ball had touched the grass before Harmer caught it.

Recent changes to ICC protocols makes it easier for the third umpire to overturn the soft signal.

But the Proteas were furious with the decision, believing that Harmer gathered the ball cleanly, and England captain Stokes has opined that there should be a review into ‘soft signals’ across cricket.

‘ICC should get rid off [sic] the soft signal and let the 3rd umpire who has all the technology to make the decision when the the on field umpires send it upstairs,’ he tweeted.

‘All the controversy is always around the soft signal given. This isn’t a comment on the decision FYI.’

However, the third umpire overruled the decision much to the frustration of the Proteas

After stumps, Labuschagne said he believed the third umpire made the right decision while adding that in another era, he would have copped Reiffel’s call on the chin.

‘If there’s no TV (replays) then I’m walking,’ he told reporters.

‘But with the amount of slow-motion footage you see of the ball, you see his fingers push and split open.

‘According to the technicalities, some of the ball is touching the grass, regardless of if his fingers are under it or not.

‘It’s hard because back in the day or even before we had this technology or camera work, they would just send you packing.’

After the third umpire handed down his decision, Proteas captain Dean Elgar remonstrated with umpire Chris Gaffaney, clearly aware of the significance of the dangerous Labuschagne remaining in the middle at 1-130.

Tongue-in-cheek, Anrich Nortje signalled that South Africa should use their DRS review on the third umpire’s decision.

‘If you look at the angles, to us it looks like fingers are underneath it,’ Nortje said.

‘Unfortunately we didn’t get that one. I think it would’ve been a big one at that stage. We were convinced it was out.’

Labuschagne was eventually dismissed for 79 runs off Nortje’s bowling.