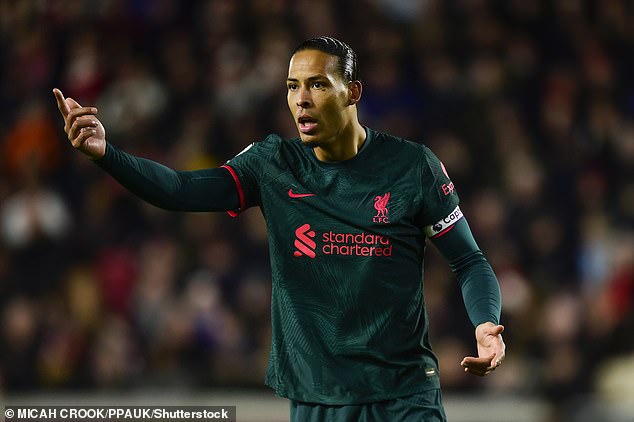 Liverpool have been dealt a huge blow with concerns that the injury Virgil van Dijk picked up against Brentford could be worse than first feared.

The centre-back picked up the problem during the club’s 3-1  Premier League loss at the Bees on Monday.

The issue is thought to be worse than initial predictions and could keep him out on the sidelines for weeks.

Van Dijk is now due to have a scan to check out the full extent of the damage but either way Jurgen Klopp is set to be given a defensive headache without his key centre-back available.

Van Dijk played just 45 minutes of the loss at the Gtech Community Stadium before being withdrawn at the break.

Klopp had been hopeful that Van Dijk’s condition could see him return quickly speaking after the defeat in London.

The Reds boss said: ‘Virgil felt a little bit his muscle, but he said he’s fine and he’s a very good judge of these things.

Matip, who replaced Van Dijk on Monday night when the Reds were already 2-0 down, is now likely to come into the team to partner Ibrahima Konate in the back four, with Joe Gomez also an option.

The Dutchman’s issue is just the latest injury frustration for Klopp who is also without Luis Diaz, Diogo Jota, Arthur Melo, James Milner and Roberto Firmino.

However, the Reds’ fixture list is not densely packed over the next few weeks that Van Dijk is likely to miss.

After the FA Cup tie at home against Wolves on Saturday, the Reds then only have three matches across the next month, including a trip to Brighton a home clash against Chelsea and another match against Wolves in the Premier League at Molineux.

Ideally, Klopp will now be desperate Van Dijk could return to action on February 13 for the huge Merseyside derby against Everton at Anfield.

Klopp has already been downbeat over Liverpool’s chances of making the top four this term following their fifth defeat of a campaign where they trail fourth place Manchester United by seven points.