Watch out for these two coronavirus scams that could trick ANYONE: Police warn of fraudsters trying ‘to take advantage of the public’

Fraudsters have hijacked official Government communications to try and scam people. The first text is legitimate, the second is not

Callous fraudsters are spoofing official government phone numbers and impersonating the taxman in a bid to coax worried Britons into handing over money or their bank details.

One screenshot posted on social media platform Twitter by Sky News political reporter Tamara Cohen, showed scammers had managed to hijack the thread of a genuine official UK Government coronavirus alert service, which sent out a text message earlier in the week.

The message – appearing to be from the genuine number – told the recipient that  they needed to pay a £35 fine, after being ‘recorded as leaving their home on three occasions’.

There are then two links that the recipient could open. These are likely to go through to dodgy websites looking to steal personal information or install malware.

Given the current climate, many may be panicked by the message and click the link without processing the contents properly.

Fraudsters are able to send messages that appear to come from genuine numbers – such as the Government, or banks – with inexpensive services available online offering ‘number spoofing,’ which we explain in more detail further below.

Meanwhile, the Metropolitan Police shared a text message claiming to come from a line labelled ‘coronavirus’, telling the recipient they were owed a £258 ‘goodwill payment’ from HMRC, and that they needed to follow the link to get it.

Following the link would have likely resulted in victims handing over their bank details to fraudsters, who could subsequently use it for identity theft or to simply steal money from bank accounts.

The fraud messages come less a week after the UK’s official fraud reporting service Action Fraud revealed £970,000 had been lost in coronavirus-related scams since the start of February.

While the majority were related to online shopping scams, with people ordering masks or hand sanitiser which never arrived, there were over 200 reports of phishing emails.

The Metropolitan Police wrote on Twitter: ‘We are aware of scammers sending text messages such as the below to take advantage of unsuspecting members of the public at this time.

‘Never click on links that are included in a text or email unless you are 100 per cent sure it’s verified.’ 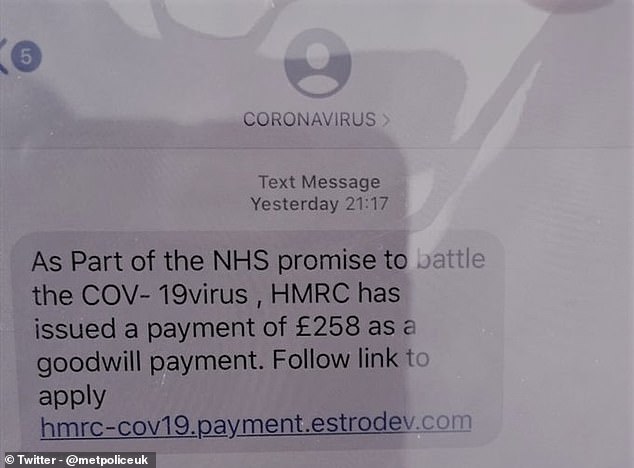 It posted a screenshot of another fake text claiming the recipient was due a goodwill payment from the taxman. Following the link would likely lead to fraudsters harvesting bank details

People may be caught out in these number spoofing scams, especially if they are part of a string of otherwise legitimate text messages and given the worried state many are in over the coronavirus pandemic.

Number spoofing or smishing scams can also ask recipients to call a phone number, this is usually done when fraudsters impersonate banks and query customers about suspicious transactions; which is something banks actually do.

Because the number is successfully spoofed, these texts often look like they’ve come from a legitimate number, whether it is a bank, the taxman, the police, or in this case the Government’s official coronavirus warning line.

HMRC has sought to crack down on the practice, telling This is Money last June it was working with Ofcom and the telecoms industry to prevent spoofing of 1,050 numbers used by scammers.

The technology needed for these scams is relatively inexpensive to obtain, and one person at a major high street bank last year expressed dismay that the practice had still not been stamped out.

In the meantime, people are being warned to be doubly vigilant at a time when people are likely to be even more stressed than usual and more information, and disinformation, is circulating.