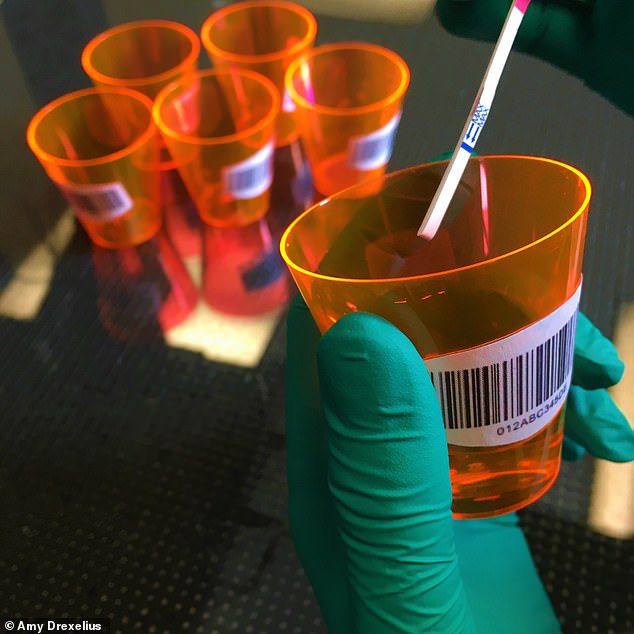 By Natalie Rahhal Us Health Editor

At-home coronavirus tests may soon be sensitive enough to tell people if they are infected before they even develop symptoms, thanks to a new invention.

Cheap, daily, at-home coronavirus testing would be the ‘holy grail’ to reopening society ahead of a widely available vaccine.

But current testing technology is unlikely to pick up the virus from nasal, saliva or urine samples until a few days after exposure, and typically after symptoms have begun (if someone is going to become symptomatic).

That’s because there aren’t enough copies of the virus in the person’s body – and therefore their sample in those first days of infection – to be detected by the extremely powerful machines in high-tech labs.

Researchers at the University of Cincinnati and Wright-Patterson Air Force Base, however, have invented a device that could solve that problem by forcing far higher concentrations of the virus within samples, so that a simple test at home can detect the pathogen.

Scientists used a high pressure device to concentrate more copies of flu virus into a sample of saliva, making them easier to detect. It’s a promising step toward a test that could diagnose people with other viruses – including SARS-CoV-2 – before they develop symptoms

Despite the Centers for Disease Control and Prevention’s (CDC) recent suggestion that people without symptoms don’t necessarily need to get tested for coronavirus, anyone can currently get swabbed and find out with near-certainty if they are infected.

But the process is expensive for health insurers, governments and health care facilities, and results typically take several days to get back, depending on where one gets tested.

There are now several approved point-of-care tests that return results on the spot, within 30, 15 or even five minutes, as well as test kits that allow people to swab themselves at home and ship the sample off to the lab.

But rapid on-site tests are not as sensitive as slower tests that get shipped to the lab, meaning that they may not pick up low levels of virus and have higher rates of false negative results.

And tests that have to be sent out to the lab, whether patients are swabbed at a clinic, doctor’s office or at home, mean lags when people may be unwittingly spreading the virus.

To solve that problem, researchers at the University of Cincinnati and Wright-Patterson Air Force Base decided they needed to find a way to force relatively more copies of a virus into a relatively smaller sample.

They tested two difference techniques for creating a more virally-concentrated solution of saliva  or urine.

To do so, the scientists decided they needed to pull a sample through a membrane to act as a ‘filter’ to put more virus in one place.

First, they tried doing this with an all-in-one device that used a vacuum to pull water, like a lavage, and all non-viral components of a sample through a membrane, so that what was left behind was more highly concentrated virus and a weak solution.

It worked, but the process was slow, taking about 30 minutes per sample.

Their second attempt accomplished the same filtration process, but using a high pressure nitrogen tank. that applied 100 pounds of pressure to each square inch of the sample.

‘The test results were extremely consistent with the second device, showing a concentration result of 33 times that of the original sample,’ said lead study author Dr Amy Drexelius.

‘Preconcentration of a 1-milliliter sample could be achieved in five minutes or even faster with higher applied pressures.’

They tested the ability of the new device to concentrate influenza A in saliva as well as in urine. They also tested its ability to detect the pregnancy hormone HCG in urine with success, meaning it could lead to a better pregnancy test too.

Coronavirus samples were not tested through the device, but its ability to concentrate and catch flu suggests it will be able to do thee same for SARS-CoV-2.