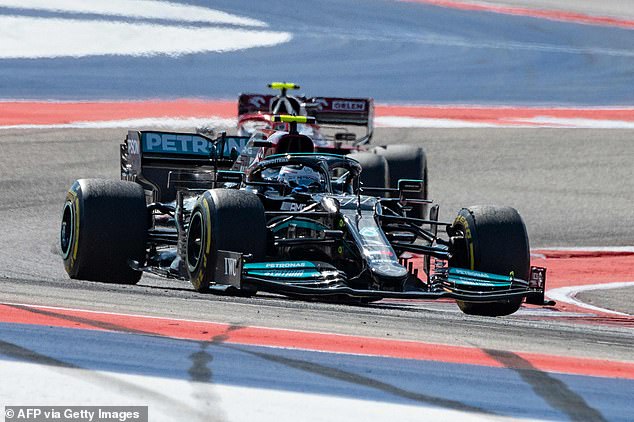 
Mercedes say their recent engine penalties are down to a fear of a ‘catastrophic’ result that would see them fall behind in their battle against Red Bull.

Mercedes have had several disruptions throughout the season so far as they have used more Power Unit components and, as a result, had more grid penalties than all of their rivals.

During the United States GP on Sunday, Valterri Bottas fitted a new engine (ICE), leading to talks of yet another penalty for Lewis Hamilton.

But chief strategist James Vowles has revealed it was due to the fear of not finishing the Grand Prix as we head into the final five races of the season.

Vowles explained in the team’s recent race debrief: ‘The reason is that we are balancing performance versus reliability to the end of the season.

‘One failure to finish a race, be it because of a chassis or Power Unit fault, would be catastrophic for the championship and as a result of that, we are managing that in the best way possible to the end of the year.

‘In the case of Valtteri, that meant taking one further ICE to make sure we had absolutely the best compromise.’

Vowles added: ‘As to whether it improved (Bottas’) performance, yes a small amount but it’s more about the balance across the remainder of the season rather than one event.

‘So this change, as painful as it was during the Austin Grand Prix, will actually pay dividends across the next few races.’

Mercedes currently lead Red Bull by 23 points in the team standings, but their hopes of another Drivers’ Championship title still hang in the balance as Hamilton trails Red Bull’s Max Verstappen by 12 points.

The final five races of the season are in Mexico, Brazil, Qatar, Saudi Arabia and the United Arab Emirates.