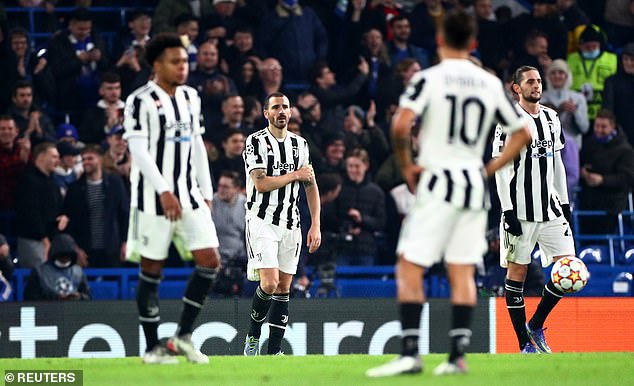 Juventus are branded ‘shameless and unwatchable’ by furious Italian media after being thrashed 4-0 by Chelsea, with papers claiming they ‘surrendered and were taught a football lesson’ in Stamford Bridge rout


The Italian media have not held back on their damning criticism of Juventus after they were thumped in the Champions League at the hands of Chelsea on Tuesday night.

The Blues cruised to a 4-0 victory at Stamford Bridge courtesy of goals from Trevoh Chalobah, Reece James, Callum Hudson-Odoi and Timo Werner – a result that saw them leapfrog their opponents to top Group H with just one match remaining.

Juve were disappointing as such the Italian news publications have let them know about it with Tuttosport blasting them as ‘shameless’ and ‘unwatchable’.

They go on to add that they ‘surrendered’ in London and were given a ‘football lesson’ by Thomas Tuchel’s side who ‘crushed’ them.

Corriere dello Sport is equally as harsh. Juventus are the biggest club in Italy, but the publication brandishes them as ‘Little Juve’ following their humiliation.

They add that Chelsea ‘dominated’ but Juve boss Massimiliano Allegri tries to spin a positive out of the result by stating that they have achieved their objective by qualifying for the last 16 of the competition.

They claim Juventus ‘are rushing to repair the damage by making a £42million bid for the striker in January’.

Juventus sit second in Group H – level on points with Chelsea at 12 apiece after five matches. However, they have a worst head-to-head record (winning 1-0 in Turin, before losing 4-0 in London) meaning they can only finish as group winners if Chelsea drop points at Zenit St Petersburg on December 8 and they beat Malmo at home.