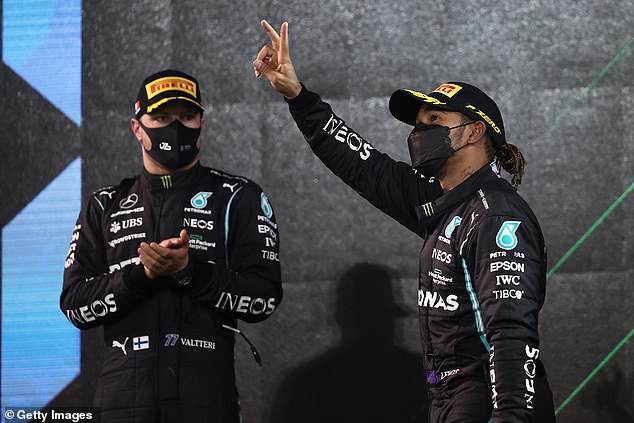 
Valtteri Bottas found it ‘difficult to take’ playing second fiddle to Lewis Hamilton at Mercedes and is relishing the ‘good feeling’ of a lead role with Alfa Romeo in 2022.

Bottas, 32, spent five years with Brackley-based Mercedes after impressing earlier in his career with Williams.

The Finn played aa key role in Mercedes winning five straight Constructors’ Championships but there was never any doubt that he was the No 2 to Hamilton and that dynamic was tough on Bottas.

‘When I joined Mercedes, it was difficult for me to take the lead because of Lewis being there,’ he told the Sun.

‘With him being in the team, it was always difficult for me to take that lead role.

‘So now it is different and a fresh start for me — and having that lead role is a good feeling.’

Bottas was once referred to as a ‘wingman’ by team boss Toto Wolff – a term that the driver took issue with at the time – and he secured back-to-back second place finishes in the drivers’ championship in 2019 and 2020.

In 2021, when Hamilton was dramatically beaten on the final lap of the final race by Red Bull’s Max Verstappen, Bottas finished a distant third, 161.5 points behind his team-mate, who came second.

Despite his drop off in competition in 2021 and the mid-season decision to confirm he would be replaced by rising star George Russell for 2022, Bottas is excited about a fresh start.

He added: ‘A part of me is always going to miss working at Mercedes. Now I have started looking back at my time there, I have tried to take all the positive moments we had.’

Bottas departed Mercedes on good terms, receiving a guard of honour when he left the team’s Brackley HQ for the final time in the off-season.

Hamilton declared Bottas his ‘best ever team-mate’ when it was confirmed he would be signing a deal to join Alfa Romeo.

He posted: ‘I’m immensely proud to have worked alongside Valtteri Bottas for the last five years.

‘Together, we’ve been part of a team that has delivered four Constructors’ Championships, and we’ve motivated one another to keep pushing through the ups and the downs.

‘He has been the best team-mate I’ve had the pleasure of working with. Your speed and resilience has been impressive but where you truly stand out to me is the human being you are.

‘You are greater than you know and I know there’s a bright future ahead for you.

‘Thank you Valtteri for all of your support and amazing contributions to this team. You will be missed. I wish you all the best for your future endeavours. Let’s finish off strong and get that 8th for the team.’