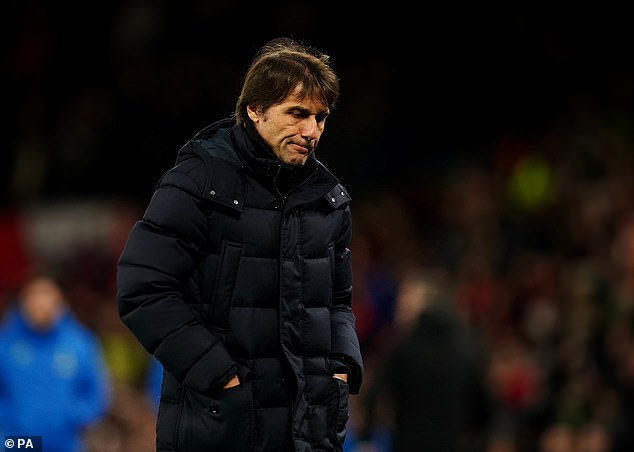 Tottenham boss Antonio Conte has admitted his side’s 3-2 loss to Manchester United is ‘difficult to explain’.

Cristiano Ronaldo scored a late header to seal a hat-trick and condemn Tottenham to their 10th Premier League defeat of the season.

Conte bemoaned his side’s lack of ‘experience’ and game management but heaped praise on Ronaldo, who created history on Saturday.

Speaking to Sky Sports, Conte said:  ‘It is very difficult to explain this loss. In a difficult stadium and a difficult atmosphere against a strong team like United.

‘I think we need to show more experience, to manage some situations, because the game is, when you play a game, there are many games inside the game.

‘And I think sometimes you have to understand when to push, when to increase the intensity, and when is the moment to be calm and not hurry.

‘I think in this aspect we have a lot of space for improvement. You don’t buy experience, you improve your experience after these types of games. We have many young players in the team and hopefully after this game they have the possibility to learn.’

Ronaldo’s hat-trick meant he became the leading goalscorer in FIFA history and Conte was full of praise for the forward while saying United wouldn’t have had a ‘good night’ without the Portugal international.

‘We are talking about a player, not only tonight, has showed to be a top top player. Don’t forget that Cristiano and Messi are the two best players in the world in this era,’ Conte said.

‘Before it was Maradona and Pele but this era it is Cristiano Ronaldo and Lionel Messi. You have to know that when you play against this type of player, they are decisive. I think honestly, without Ronaldo, for United it wasn’t a good night.’

The loss against the Red Devils sees Tottenham remain seventh in the league, five points behind Ralf Rangnick’s men and three behind Arsenal, having played two more games than their north London rivals.