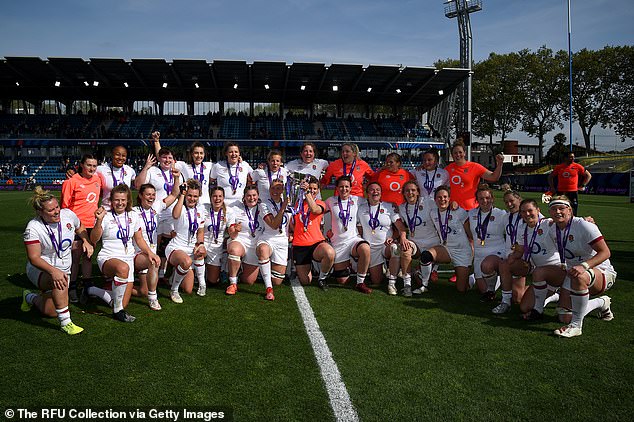 As he toasted the Six Nations title with a bottle of lager, Simon Middleton joked that he had not thought beyond the next 10 hours of celebrations.

It was a Grand Slam party that never looked like being pooped: England scored 45 tries to four throughout the tournament and the beers may as well have been on ice for the last five weeks.

When he wakes up with a sore head on Sunday morning, Middleton’s thoughts may well turn to the World Cup. England have become the dominant force in world rugby, here extending their winning run to 23 matches. They are leaving their rivals trailing and unless the Black Ferns can catch up, England will be talked about as the outstanding favourites to lift the trophy in New Zealand this year.

England were hit by an early French siege on Saturday. Flanker Alex Matthews had blood pouring from her face and No 8 Romane Menager scored inside four minutes, yet it was a game the Red Roses never looked in danger of losing.

Before kick-off, France paraded their own Grand Slam winners of 2002. It was a watery-eyed reunion as they witnessed how far their sport has come. There was a sell-out crowd of 11,000 but France’s heavily-praised class of 2022 struggled to live up to the occasion.

England’s three tries all came from driving lineouts, with their skilful strike runners in the backline barely called into action. They silenced the boos and hisses of the home crowd with an exhibition of power at the set piece. It was a day for the front-row forwards, with prop Sarah Byrne scoring twice and hooker Lark Davies named player of the match.

‘It was not always pretty but very effective and when you get to games like this you want to entertain but you don’t want to be the gallant loser,’ Middleton said.

‘The players realised how they were going win the game, keep the crowd quiet and win the trophy. This is one of things we wanted to find out: how resilient we are. We know what we’ve got to do to be classed as a great side but we’re getting there, we’re working towards it.’

As far as sporting spectacles go, it fell short of the free-flowing try-fests of recent weeks. Yet it showed that England can win ugly, overcoming a powerful French pack. They shackled the running threat of brilliant scrum-half Laure Sansus, and they punished the ill-discipline of France, who conceded a series of early penalties.

Kicking for corners, England took charge of the territorial battle, scoring their three quick-fire tries — through Byrne and Abbie Ward — to lead 21-7 after 25 minutes.

‘I never thought we were going to lose the game once we got back to seven-all. They played like great champions,’ Middleton said.

‘We wanted to know, what is this side built on? Can it stand up to the utmost pressure?

‘We need to find a way to free the girls up to feel like they can play a little bit more. We’ve got some fantastic players who we probably didn’t get on the ball enough. But it was some of the best lineout defence I’ve seen. It won us the game.’

In a battle of attrition, one of England’s most impressive spells was their defensive stand just before half-time. The visiting back-three struggled under the high ball, often gifting France entry into their 22. Yet their defence held strong, disrupting lineouts, with lock Zoe Aldcroft making 18 tackles.

In the second half, England had a further test of their resilience. Zoe Harrison, the fly-half, was yellow-carded for intentional knock-on and England, for the first time in the championship, were reduced to 14. Yet still France failed to score.

Centre Emily Scarratt extended the lead from the kicking tee on the hour mark, when Maelle Filopon was sin-binned for another intentional knock on. Scarrett finished as the tournament’s top scorer with 39 points, made up of two tries, 13 conversions and one penalty

And Scarratt pulled off a try-saving tackle on Emilie Boulard but the English resistance was broken in the 67th minute, when Annaelle Deshaye scored from close range.

Scarratt, England captain for the day because Sarah Hunter was injured, said the win was ‘really important, especially away from home with a tough crowd and tough opposition’.

Yet the victory never looked in any doubt, and, as Hunter said, looking ahead to the World Cup, ‘Our journey hasn’t finished yet.’