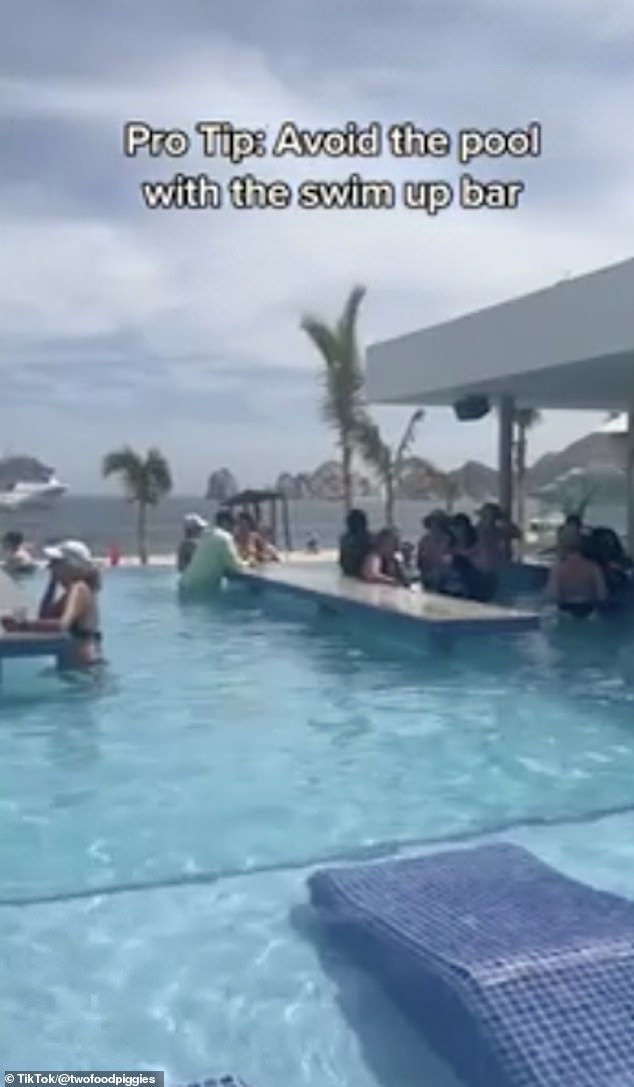 A woman who advised tourists not to use swim-up bar pools has sparked a heated debate on TikTok.

Whitney, who lives in Vancouver, Canada, who uses the handle @twofoodpiggies and boasts more than 22,000 followers, advised people not use swim-up bar pools because the drunk people at her hotel in Cabo, Mexico, admitted they were urinating in the water.

Explaining her logic in a follow-up clip, she said that people sit by the pool bar for hours on end, therefore the hotel pool is likely to contain more urine than the average public swimming pool where people dip in and out.

Responses to the clips were torn as many commenters argued ‘everyone’ pees in the swimming pool, while others claimed they always get out of the water to use the washroom, and some said they always avoid public pools altogether.

Whitney, who lives in Vancouver, Canada, has gone viral on TikTok after advising people not to use swim-up bar pools. Pictured: The pool at Whitney’s hotel in Mexico

Posting on TikTok, Whitney said one woman was confused that people would leave the pool to use the washroom

Sharing footage of the pool at her hotel, Whitney said: ‘Vacation pro-tip, do not hang out in the pool where the swim-up bar is. There is literally intoxicated guests admitting that they are peeing in the pool here.’

‘One girl didn’t understand why some people were leaving the pool to use the washroom,’ she captioned the post.

Whitney explained her point further in a follow-up video, saying: ‘I understand there’s urine in any pool you go to, but why do you want to avoid the swim-up pool bar?

‘Well for instances there are people sitting there for like four to six hours without leaving and consuming alcoholic beverages. They don’t really need to go anywhere and just want to save their spot at that pool.

‘Versus another pool on the property where people are going in for a couple of minutes and leaving.

In response to Whitney’s first video, many people commented that ‘everyone’ urinates in the water and argued in favour of the vacationers who stay in the swim-up pool throughout the day.

One person wrote: ‘Everyone pees in the pool it’s just a matter of admitting it or not.’

‘Welcome to every pool anywhere ever,’ another said.

A third commented: ‘There’s so much chlorine you’re fine’

‘As a collegiate swimmer, I promise we all peed in the pool everyday,’ a fourth added.

However, others agreed with Whitney and claimed it’s ‘good advice’ to avoid the swim-up bar pool.

‘I always get out of the pool. Ocean I stay in,’ one wrote.

‘This is why I don’t swim in anyone else’s pool except my own,’ another said.

‘Not me diving under water at a swim-up bar and getting an ear infection,’ a third commented.

A fourth added: ‘Pro tip – don’t swim, because literally every source of water large enough to swim in has people peeing in it on a semi-permanent basis.’