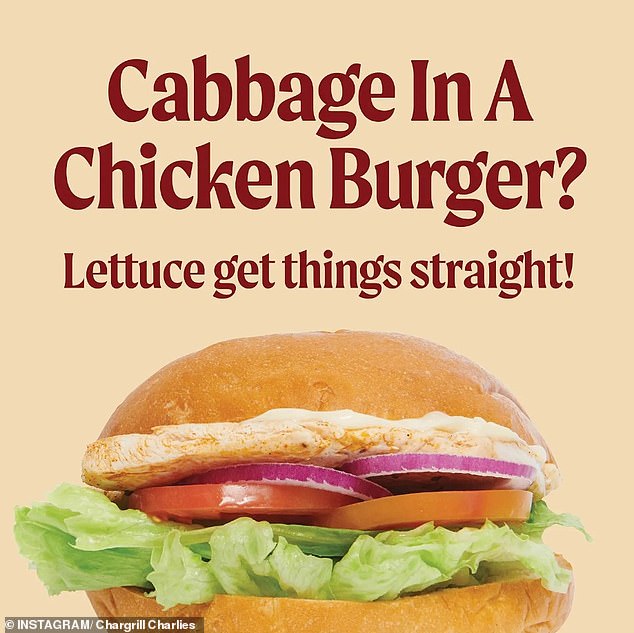 Chargrill Charlie’s has hit back after both KFC and Subway decided to incorporate cabbage into their burgers and sandwiches instead of lettuce.

The famous chicken shop took to Instagram on Wednesday to address the worsening price hike of lettuce and how that’s affecting some of the dishes they and other hospitality venues cook.

‘Unlike other chicken establishments, Chargrill Charlie’s will not be using cabbage in our chicken burgers! END OF STORY,’ a spokesperson said definitively.

Subway is the second restaurant within two days to announce it’s temporarily mixing the lettuce and cabbage together as prices for a single iceberg soar to $12 after crops were wiped out in the recent floods across NSW and Queensland.

It comes a day after KFC announced the change to its menu until the lettuce shortage eases.

But Chargrill Charlie’s charges upwards of $12.20 for their chicken burgers while KFC charges less than $6 for its Original Recipe Burger.

Some Subway stores are already making do without the staple sandwich filler, prompting the fast food giant to address the issue on its Australian website.

‘Lettuce explain: Being a fresh food company means riding the ups and downs of fresh produce,’ the site states.

‘We’re currently facing a shortage of lettuce from our local lettuce farmers.

‘So, in the short-term, we’ll be mixing lettuce with cabbage … while more lettuce is on the way.’

Subway has confirmed the temporarily menu change on its Australian website

Reaction from Subway lovers has been mixed with some cheekily calling for the return of lettuce when the fast food giant asked online on Wednesday what menu item should be brought back.

Others saw the funny side.

‘Lettuce pray they can get this sorted quickly. It may just be the tip of the iceberg. The politicians need a real dressing down, and their salaries should be garnished,’ one man tweeted.

Some Subway stores across Sydney, Brisbane and Mackay in central Queensland are already out of stock and forced to apologise for the inconvenience.

‘Due to recent bad weather, the supply of lettuce is severely affected resulting in reduced serving for the time being,’ one in-store sign read.

One customer tweeted: ‘Couldn’t get lettuce on my Subway in Brisbane the other day. Empty tray.’

KFC announced on Tuesday the introduction of a cabbage ‘blend’ would be used in its burgers, wraps and salads.

‘Due to the recent floods in NSW and Queensland we’re currently experiencing a lettuce shortage,’ the notice on its website read.

‘So, we’re using a lettuce and cabbage blend on all products containing lettuce until further notice.’

The news has prompted KFC lovers to complain the result is less than ‘finger lickin’ good’.

Customers who don’t want lettuce-cabbage mix can ask for it to be removed from their order.

It comes just months after KFC was forced to reduce menu items, including their original burgers, zingers, fillets and wings due a chicken supply shortage.

Hoping to not follow suit is McDonald’s, which says it’s currently not experiencing lettuce shortage for its Big Macs, one of the chain’s biggest sellers.

‘We’re working closely with our suppliers to continue to serve up our full menu to customers,’ a spokesperson said.

KFC lovers will also see a lettuce-cabbage mix in their burgers, wraps and salads

A few weeks ago, a head of lettuce was costing shoppers just $2.80, however due to an ongoing supply crisis the price has skyrocketed to as much as $12.

A supermarket in suburban Brisbane was pictured selling a single head of iceberg lettuce for as much as $12.99 last month.

The price increase follows a wet start to the year with unprecedented rain and flooding spoiling crops in NSW and Queensland.

Some lettuce farmers in Queensland have lost their third crop in a row and risk the collapse of their businesses following the unseasonable rain.

The peak horticulture group warned growers in the state’s southeast will need millions to recover from the string of natural disasters.