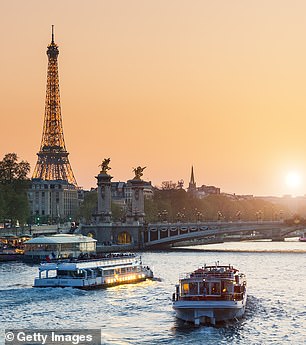 Ahead of the third season of Emily In Paris, Joanne Hegarty headed to the City Of Light to check out some of Emily’s favourite places — and some of her own

Does the love affair with Paris ever end? Non. In fact, the more times you visit and the more familiar you become with the City Of Light, the more that love intensifies.

It is one of the reasons why so many of us are addicted, often secretly, to Emily In Paris, the Netflix show which returns to our screens next week for a third series.

The cast is led by Lily Collins as a fashion-crazy American who has to sink or swim in an advertising agency without speaking much French. And, let’s be honest, the Parisians do not suffer fools.

The storylines, and Lily’s Technicolor outfits, are highly entertaining, but it’s the city of Paris that shines the brightest. During my visit, I stayed at the new Madame Reve Hotel, near the Louvre, and travelled on the Eurostar from London St Pancras. My mission was to check out some of Emily’s favourite places — and some of my own…

Joanne stayed at the new Madame Reve Hotel (above), near the Louvre

One of the stylish ensuite bathrooms at Madame Reve Hotel

French chic: The show’s storylines, and actress Lily Collins’ Technicolor outfits, are highly entertaining, but it’s the city of Paris that shines the brightest

TABLE FOR ONE, PLEASE

You can’t go more than a few feet in Paris without stumbling upon a cafe, its tables and bistro chairs spilling onto the street. Place des Vosges is dotted with cafes, art galleries, opera-singing buskers and Victor Hugo’s former residence, now a museum.

Here, Carette cafe is where immaculately dressed locals have morning coffee or an afternoon pastry.

Emily likes a glass of chablis in Cafe de Flore on Boulevard Saint-Germain, which opened in the 1880s.

Joanne notes that Emily often has a glass of wine in Cafe de Flore on Boulevard Saint-Germain, a spot that was once favoured by Ernest Hemingway

Ernest Hemingway was a regular, and French designer Sonia Rykiel came so often that she has a sandwich (made with no bread) named in her honour. This is where Emily begins a short-lived fling with Thomas in the first series.

Cafe de la Nouvelle Mairie, on Rue des Fosses Saint-Jacques, is a favourite of Emily and her friend Mindy. Tuck into the fabulously fresh croissants and its excellent selection of organic wines.

BARS WITH A TWIST

Parisians take cocktails seriously and will tell you off if you even stir one the ‘wrong’ way. Little Red Door, at 60 Rue Charlot, has featured in the World’s 50 Best Bars for seven years. Dim lighting, blue velvet sofas and a playful drinks menu make it great fun. The show’s cast and crew had drinks here when the second series ended.

When the second series ended, the show’s cast and crew had drinks at the Little Red Door (above) – a renowned bar with a ‘playful’ drinks menu

After a long day’s work on a perfume commercial shoot at the Pont Alexandre III, Antoine, Sylvie and Emily stop for drinks at Faust on Rive Gauche, with a view of the Seine. This place has a terrace for cocktails and a restaurant, and it’s a club at night. Serpent a Plume, in Place des Vosges, boasts of an espresso martini ‘so dirty it needs a safe word’. After dinner, have a bop on the small dancefloor. It attracts all ages and adventurous spirits.

LOVE IS IN THE AIR

Rue de l’Abreuvoir is touted as ‘the prettiest street in Paris’ on the Netflix show. Its narrow cobblestones and old-world charm make it a must-see.

Enjoy a walk or a jog along the Seine, just like Emily. Sit in a deckchair and read a book, or have oysters and wine in an outdoor cafe while listening to jazz.

The landscaped gardens of Palais Royal on Rue de Valois are where Emily and Mindy first meet. Its large fountain, tree-lined walkways and flowerbeds are glorious all year round, and Jardin du Luxembourg is perfect for a romantic picnic on its famous green chairs.

Emily’s love interest Gabriel is the owner of Les Deux Comperes, which is actually a traditional Italian bistro that goes by the name of Terra Nera, near Place de l’Estrapade.

Emily and her colleagues from the Savoir agency regularly frequent the cosy Bistrot Valois on Place de Valois before and after work.

What’s on the menu? It’s known for its classic steaks, foie gras and wide selection of wines.

Emily meets Gabriel’s on-again, off-again girlfriend Camille for an awkward lunch at Tortuga on Rue de la Chaussee d’Antin. It’s famed for its high-end food and glamorous rooftop setting — you can also catch a glimpse of the Eiffel Tower.

One of the best stores for vintage is Plaisir Palace, on Rue Paul Dubois. In the new series, Emily wears a gold sequin dress and an orange jacket from here. Her French boss, Sylvie, wears a few pieces, too.

Pick up a pink beanie or colourful knitwear like Emily’s at Merci, a three-storey boutique on Boulevard Beaumarchais that is full of wonderful clothes and accessories.