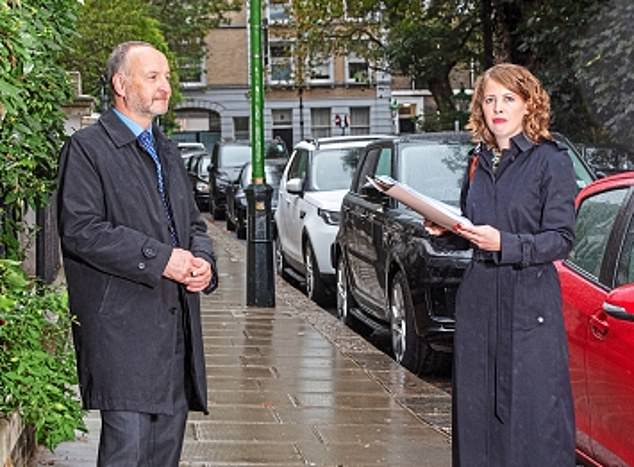 The boss of National Savings & Investments is not just sorry for the recent customer service meltdown at the Government-backed savings organisation. He’s ‘really, really sorry’.

For weeks, letters have been pouring into The Mail on Sunday from readers at their wits’ end with the poor service from NS&I.

They have been left on hold for up to an hour on the phone, waited weeks to have correspondence answered, while many have struggled to move money in or out of their accounts.

We decided it was time NS&I told us what on earth was going on. So we invited chief executive Ian Ackerley to explain – and tell us what is being done to put things right.

On Thursday, as we showed him the huge pile of correspondence we had received from frustrated customers, Ackerley said: ‘We have a great record of delivering really great, award-winning customer service. But quite plainly, we’ve not been there for some of the Covid crisis.

‘It’s important to stand back and understand why, but the quality of service we deliver is really important to me and all my staff. For that reason, I’m really, really sorry to everybody where something has gone wrong.’

Over the next hour and a half, as he explained how NS&I got into this muddle, Ackerley was at pains to remind us again – and again – just how sorry he was.

So how did things go so wrong at NS&I?

The NS&I customer service team, based at sites in Durham, Glasgow and Blackpool, is normally 1,000 strong. But in March, this number had fallen to 750 as staff either got ill with Covid-19 or had to self-isolate.

Social distancing meant some had to work from home while fewer could come into its call centres at any one time.

Of course, this posed a challenge to the organisation. But, as many frustrated NS&I customers have pointed out, other businesses in a similar situation seem to have managed far better.

As one reader, Helen Driver, 60, from Derbyshire, put it: ‘I understand things are difficult, but other financial institutions have worked productively during the pandemic. So why couldn’t NS&I?’

What happened next was unique to NS&I. While other financial institutions reined in their workload to make it manageable during lockdown – withdrawing products and ceasing advertising for new customers – NS&I had a mountain of extra work dumped on its desk.

This is because, every year, the Treasury sets a target of how much money it wants NS&I to bring in from savers.

At the beginning of the year, the target was set at £6billion. But when Covid-19 struck, it was dramatically increased – to an astronomical £35billion.

The Treasury raised the target as it looked for extra funds to pay for its unprecedented spending spree to help people and businesses affected by the economic impact of the pandemic.

‘Between April and July last year, our book grew by about £2billion,’ says Ackerley. ‘During those same months this year, it grew by £14.5billion. So those poor threequarters of a normal team wrote seven times the business.’

Ackerley could be forgiven for feeling frustrated about being given a target that was so much higher than usual under already-strained conditions. He shrugs: Needs must. We were trying to support the economy. We felt we needed to do our bit.’

He explains that he warned the Treasury that the new target would be a challenge, adding: ‘We said it would be a stretch – because you don’t go from an organisation that’s been set up to deliver £6billion to then deliver £35billion. But it needed to be done – it’s a time when the nation needed the money.’ However, Ackerley is less philosophical when talking about the role he believes NS&I’s competitors indirectly played in the customer service meltdown.

However, NS&I didn’t, instead keeping rates higher to entice savers to help it hit its new target and also to support savers during a difficult time.

What NS&I failed to foresee was how far other providers would cut rates, leaving it way ahead of the pack and the only sensible choice for any saver looking for a return on their money.

‘We weren’t to know quite how ruthless our competitors would be about reducing rates,’ says Ackerley. ‘Between them, our competitors have made about 1,400 rate cuts since April and withdrawn over 400 products – while we stood by savers.’

He adds: ‘I think the core question is why did our competitors cut their rates? Because did they cut their mortgage rates and lending rates to the same degree? You might want to look into that.’

The answer is clear: they didn’t.

By July, NS&I staff numbers were back up to about 950 as people returned to their jobs and settled into new ways of working.

However, by then, NS&I had a massive backlog of customer queries and complaints. What followed has been a messy game of catch-up. Although the organisation has cut the length of time it takes to deal with general correspondence, it still requires an average 11 days for a response – down from 35 days in the summer. Call waiting times are still averaging between 15 and 17 minutes.

‘I’m really sorry that people have had to wait a long time on the phone,’ says Ackerley.

WHAT TO DO IF YOU’RE DESPERATE

How readers can negotiate the NS&I customer service nightmare:

Since August, there has been a phone option for those sorting out the financial affairs of a departed loved one.

However, readers reported to us that the option was hard to find. You had to press 3 on the main menu of options for ‘anything else’ to be given a secondary menu, one of which was for ‘if someone has passed away’.

The day after we met NS&I this was remedied: now all callers will be asked if they are dealing with a bereavement.

A spokesperson for NS&I says: ‘We are taking on board your comments and are reordering the options available to customers.’

Finally, if none of these tips work, get in touch with us – and we will do our best to help resolve your issue. Email [email protected] mailonsunday.co.uk

He admits that waiting on hold ‘can feel like an age’ and that the current waiting time is still ‘where it’s been rattling around for a chunk of the summer’. To deal with the backlog, NS&I has hired 200 new staff and the first are starting this week. In Blackpool, the team has spread into another building in order to raise numbers while maintaining social distancing.

‘Over the next few months, that will progressively help us to drive down waiting times,’ says Ackerley. ‘Ultimately, we want to get back to where we were before.’

Last month, NS&I announced a series of dramatic rate cuts on many savings products. While this will cut inflows and help customer service teams to reset, it’s bad news for savers.

It also seems harsh that the provider that claimed to want to ‘support savers during the pandemic’ no longer seems fussed about continuing to do so.

What about helping savers?

‘Part of the challenge is that early on in the coronavirus crisis we clearly skewed that balance towards the customer and we held their rates.

‘But ultimately at some point we needed to rebalance. And after six months of holding the line on rates, we felt the time had come for us to resettle that equation.’

Meanwhile, in NS&I’s Glasgow and Blackpool call centres, the pace is relentless to try to clear the backlog. When a call ends, staff have two seconds before the next one.

‘The person that customers talk to when they phone the call centre is extremely unlikely to be the individual directly responsible for whatever has gone wrong. So, please, be nice to them,’ pleads Ackerley.

He adds that most staff live in areas where Covid rates are high and so ‘domestically they are under quite a lot of stress’.

But they tend to be experienced, with an average length of service of eight and a half years.

As the interview draws to a close, I ask Ian Ackerley if there is anything else he would like to add.

‘I just wanted to finish where I started – to say we’re really sorry for the problems that some people have had.

‘We do care about them and we are trying to resolve their issues with us.’

Send the chief executive an email: Ackerley claims that while he can’t personally answer them, he does read them all. Sometimes, he intervenes and last week phoned a customer to personally apologise and find a resolution to a customer service problem.