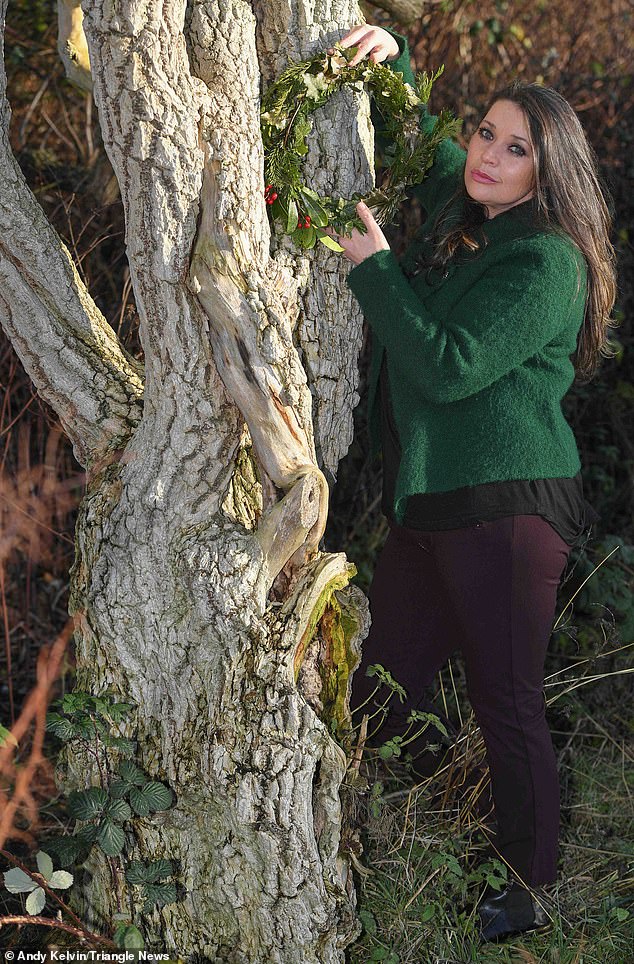 A mother-of-two who married a tree says the pair are still going strong – and are celebrating their third Christmas together.

Kate Cunningham, 37, who changed her surname to Elder when she and the elder tree tied the knot in 2019 in Sefton, Merseyside, says the pair are more loved-up than ever this festive season.

The mother, who works as a carer for her autistic son alongside her environmental work, visits the tree up to five times a week and has even decorated it with a wreath, tinsel and baubles for Christmas.

And she will spend Boxing Day with her bark-covered other half – leaving the rest of her family at home in Melling, Merseyside.

Kate married the tree three years ago in protest against plans to build a bypass through her local country park at the time.

Kate Cunningham, who changed her surname to Elder when she and the elder tree tied the knot in 2019 in Sefton, Merseyside, said the pair are more loved-up than ever this festive season

Kate, pictured, who changed her name by deed poll to Kate Rose ‘Elder’, married the tree protest against plans to build a bypass through her local country park at the time

The mother-of-one said the tree completes her and her love has only grown since their wedding at Rimrose Valley Country Park in September 2019.

She described the tree as part of her family and said their union changed her life for the better.

Kate even signs her Christmas cards as ‘With Winter Wishes, from Mr and Mrs Elder’.

The former teaching assistant admitted that she sometimes clocks up to five visits a week, with this accelerating during the lockdowns.

For her ‘wedding’ day, Kate, right, wore a flower crown and a dress made of bark to mark the event

She plans to visit the tree on Boxing Day to make sure it isn’t left out of her festive celebrations.

She said: ‘It’s our third Christmas together now so it almost feels like tradition to get the decorations out for it.

‘When I was putting them up, the tree was as attractive to me as ever in the bright December sun.

‘I made the wreath from holly, ivy, pine and red winter berries which I foraged from a walk over the weekend.

The one she’s pining for: Kate said she was instantly attracted to the tree at Rimrose Valley Country Park

‘Plus I added a little spray of festive glitter.’

Kate, from the nearby village of Melling, immediately knew the elder tree was ‘the one’ due to its earthly energy drawing her towards it.

When visiting Rimrose Valley Country Park to find the tree she would wed, her attraction to the elder was instantaneous.

The tree-loving mum has always felt connected to nature, but bonded with the elder tree on a much deeper level than anything else in the park.

Wood you do it? Kate married the tree in order to safeguard the Rimrose Valley Country Park in 2019

Kate, pictured on her ‘wedding’ day, said she was in love with the tree and that it changed her life for the better

She was attracted to its light bark colour and big size, saying it stood out from the darker oak trees in the park.

She added: ‘People still ask questions and are still unsure of my motivations behind the wedding.

‘I get asked, “has being married changed your life for the better?” Yes it has!

Kate’s family and friends fully support her marriage as they know she has always felt deeply connected to the earth.

For Kate, trees are like people – they have energy and the capacity to form bonds with things around them.

But her union with the shrub can’t be said to be entirely monogamous – as Kate has a boyfriend that has been with her every step of the way.

He supports her choice and even joins Kate on some of her visits, unfazed by their kissing and cuddling.

She still wears her wedding ring proudly, which was a birthday present from her Grandad a few years ago.

The marriage has given Kate a new lease of confidence which she channels into climate activism.

Kate’s boyfriend has been supportive of her choice of husband, and sometimes visits the three with her

The marriage was part of a winder campaign to save Rimrose Valley Country Park from being transformed into a bypass by National Highways.

Local residents campaigned to halt the new three-mile bypass, thought to ease traffic congestion, through Rimrose Valley and into the Port of Liverpool.

They argued that the dual carriageway would wipe out a large plot of green space and only redirect pollution to an eco hub.

Kate said that she likes people asking questions because it gives her a chance to share her marital joy, as well as raise awareness of Rimrose Valley Country Park.

She was inspired by Mexican women who married trees several years ago to highlight illegal logging and land clearance there.