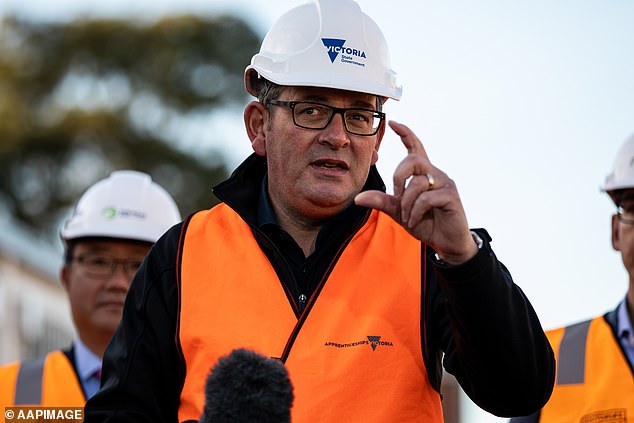 Mr Andrews was speaking to reporters in Melbourne’s south-east on Thursday about the state’s Suburban Rail Loop (SRL) project which Anthony Albanese promised his government would commit $2.2billion towards.

The Victorian Premier suggested former prime minister Mr Morrison lost the vote from many in his state ahead of the election because they felt they ‘didn’t get our fair share’ when he was in power.

‘We’ve had nine years where we didn’t get our fair share and I think all Victorians know that,’ Mr Andrews said, referencing Mr Morrison who refused to fund the project aimed at connecting Melbourne’s major train lines.

‘That may well have been one of the reasons why Victorians supported Anthony’s government so strongly was that there is a recognition that we had not received our fair share.’

Mr Andrews again made a dig towards Mr Morrison by declaring the new PM as ‘a friend to Victoria’.

‘He knows where Victoria is, he knows that Victoria matters and he’ll be a friend to Victoria … I think we’ll have a true partner in Canberra and that’s exactly what we need,’ he added.

After Mr Albanese said his government would support the SRL’s funding, Mr Morrison described him as a ‘pushover’.

‘What would happen with Anthony Albanese, he’ll be happy to pay for the failures of state Labor governments with federal taxpayers’ money,’ he said.

Mr Andrews hit back, saying: ‘Every federal dollar that Victorians get from the miserable Morrison government, (it’s like) we ought to bow our head and treat it like it’s foreign aid,’ he said.

Earlier on the campaign trail Mr Morrison made a last ditch effort to scare Victorians against voting for Labor claiming that Mr Albanese will be controlling like the state premier.

The prime minister warned voters the Opposition leader found power to be ‘very intoxicating’ and that he would govern in a similar style to Mr Andrews.

‘It’s something that I’m sure Anthony Albanese would develop a very fast taste for, and I think that is very troubling for Victorians, who I think have had a gutful of governments that love getting in their lives and telling them what to do,’ he said.

‘They’ve had enough at a state level – could you imagine if you had it doubled down at a federal level?’.

The SRL is set to begin services in 2035 but the full project won’t be complete until 2053.