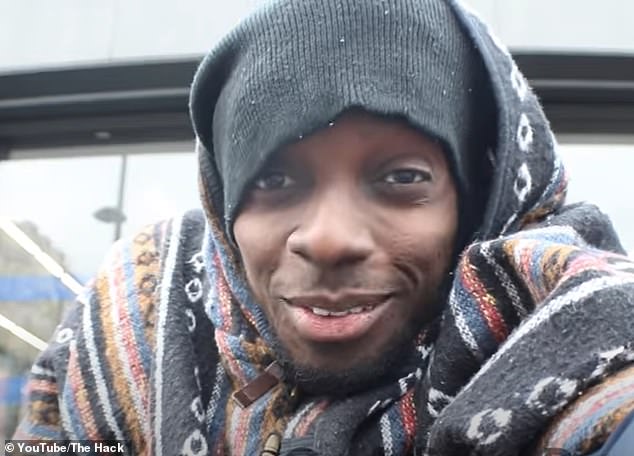 Beggars in central London could make up to £35,000 a year, a viral YouTuber has claimed after spending a day with rough sleepers in the capital.

Tọ́ba Courage, who boasts 854,000 subscribers on his YouTube channel The Hack, made the video in 2016, but it went viral again on TikTok this week.

The social media star specialises in videos on how to live for free or on a tiny budget in various places in the world, such as surviving London on £1 a day or finding food in Amsterdam if you have no money.

One beggar he spoke with claimed he received £5,000 cash in one go, while another explained she was given £80 by a single person that day.

Beggars in central London could be making up to £35,000 a year, according to one YouTuber (pictured) who spoke to rough sleepers in the British capital

Tọ́ba Courage, who boasts 854,000 subscribers on his YouTube channel The Hack ,spoke to a London beggar who claims he received £5,000 cash in one go

‘I got a £5,000 drop like six months ago,’ one rough sleeper told Tọ́ba, while a woman said she received £80 from just one person and ‘went to McDonald’s, I was starving’.

Another woman claimed she made ‘hundreds of pounds’ so she ‘could afford to sleep’.

Following his discussions, the YouTuber spent a few hours begging, and claimed he made nearly £70.

‘But most of these people, it’s their lifestyle, it’s like a vicious loop and then they’re stuck in it.’

From his chats, the YouTuber claims that those asking for money on the street were earning around £150 a day, which he says adds up to £35,000 a year based on five days a week of begging for 11 months

‘Some of them are smart, they don’t want you to know. Some of them won’t let me record them, those are the secret millionaires, I even offered them £10 – they’re like “No no no, don’t record me I don’t want people to see me”.’

Homelessness charity Crisis estimated that around 227,000 people were experiencing the worst forms of homelessness across England, Scotland and Wales in 2021.

According to the charity, 80 per cent of beggars are homeless.

Since 1824, the Vagrancy Act has made it a crime just to sleep rough or beg in England and Wales, but there are plans to repeal it following an amendment to the Police, Crime, Sentencing and Courts Bill, according to MyLondon.

However, in 2020, police urged shoppers not to hand over their money to street beggars because many are not homeless and some are claimed to be raking in as much as £200 a day.

Career beggars in Birmingham are feared to be exploiting the public’s generosity to line their pockets by pretending to be sleeping rough.

Following his discussions, the YouTuber spends a few hours begging, and claims he made nearly £70

In a memo to traders seen by Birmingham Live, Sgt Hanif Ullah said: ‘The local community have made a number of complaints of persistent begging in the area of your business premises.

‘This can become a nuisance to your shoppers, and ultimately may result in them going elsewhere to purchase shopping.

‘We need your co-operation in preventing and reducing this activity. Businesses should politely discourage beggars outside their premises. If the person refuses to move on then you may wish to call police on 101.

‘Shoppers are giving money to beggars, which encourages beggars to return, therefore advise customers on this.’

A further warning was also put out on the force’s neighbourhood alert service which said ‘The beggars we are referring to are NOT homeless they are BEGGARS.

‘They continue to come back time after time because YOU as a community are giving.’

It prompted a discussion on the Sparkhill Neighbourhood Facebook group where it was claimed one particular beggar ‘averages £150-£200 daily’.