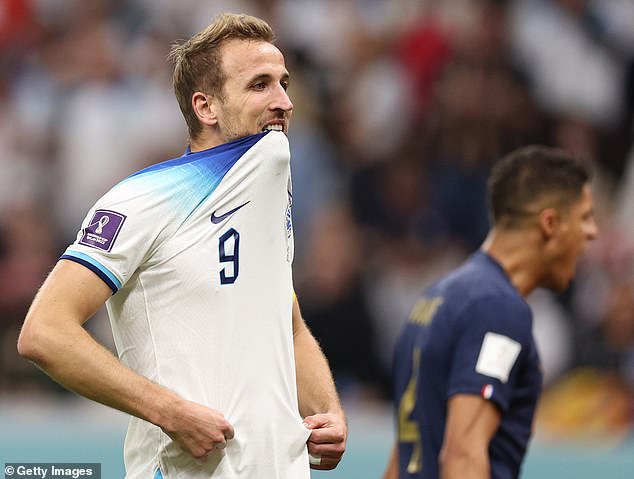 ‘We’ll rally behind him’: Harry Kane’s Tottenham team-mate Matt Doherty says the squad will help him cope with his agonising penalty miss in England’s quarter-final defeat to France – and vows to ‘get him up and running again’

By Arthur Parashar For Mailonline

Kane, who scored twice and assisted three times in Qatar, missed a vital 84th minute penalty that would have levelled the scoring for the Three Lions.

The Spurs striker had earlier converted from 12 yards to bring his side level after Aurelian Tchouameni’s first half opener – a goal which equalled Wayne Rooney’s England goal scoring record.

But the 29-year-old could not replicate his first penalty against club team-mate Hugo Lloris to cancel out Olivier Giroud’s 78th minute header which proved to be the winning goal.

Doherty, a close friend and team-mate of Kane, told Tottenham in an in-house interview that Kane was ‘one of the strongest characters mentally’.

‘That’s tough on him. These things happen. Pretty much everyone who knows H would have put their house on him scoring, everyone knows he’s the best man for the job,’ he said.

‘It will be tough for him now but when he gets back in, we’ll rally around him and get him up and running again. He’ll be fine. He’s one of the strongest characters, mentally, that we all know.’

Doherty said he thought England played well against France and that Les Bleus ‘didn’t really get going’. He added: ‘I feel like France had one attempt at goal and scored twice – the first wasn’t even a half-chance.

‘England looked dangerous. Harry obviously scored the first penalty, and then everyone knows what happened.

Another of Kane’s team-mates Lloris revealed yesterday that he had sent the England striker a text after his penalty miss.

The French goalkeeper could only watch as Kane skied his penalty way over the crossbar, meaning Lloris was not needed.

Doherty said that Kane was ‘one of the strongest characters, mentally, that we all know’

‘It’s a difficult time obviously for the English national team and for Harry but he can be proud for what he’s done for the team during this World Cup.

‘In football history many top players missed important penalties in their career. Players like Leo Messi, Cristiano Ronaldo, like Kylian Mbappe. But I have no doubt Harry will keep his chin up and he will help Tottenham and the national team to shine.’

Lloris is Kane’s captain at Spurs and they will have to put the World Cup drama behind them before the Premier League returns after Christmas.

Spurs travel across the capital to play Brentford on Boxing Day. Antonio Conte will have a decision to make, after it was announced that Brazilian World Cup star Richarlison will face a spell on the sidelines with a hamstring injury.

It means Kane may have little time to recover from his penalty heartbreak if he is called upon.